Much of what we experience in life results from a combination of skill and luck. – Michael Mauboussin from The Success Equation*

Once you start viewing the world through the lens of success and luck it is hard to stop. Every glowing profile on the cover of a business magazine gets you think about how luck played a role in the success of the hot new startup CEO. (Remember they usually don’t put the founder of failed companies on the cover.) See the xkcd panel below. 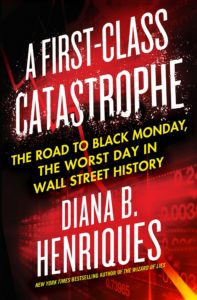 All of this is a lead up to a fascinating story by James O’Shaughnessy author of the investment bible What Works on Wall Street: The Classic Guide to the Best-Performing Investment Strategies of All-Time.** In response to the release of Diana Henriques’ new history of the 1987 Crash, A First-Class Catastrophe: The Road to Black Monday, the Worst Day in Wall Street History, Jim tweeted out his life-changing story from the 1987 crash.

I don’t want to steal Jim’s thunder so you should read his entire post. Suffice it to say that luck played a significant role in Jim’s trading outcome. O’Shaughnessy writes:

For that trade sent me down the road that led to where I am today—I concluded that my emotions were my worst enemy in the market and that listening to predictions from gurus and other prominent market forecasters was worse than useless, it was destructive.

*Additional reading on skill and luck from Michael Mauboussin: Understanding Skill, Alpha and the Paradox of Skill, The Success Equation: Untangling Skill and Luck in Business, Sports and Investing. See also this from A Wealth of Common Sense and 25iq.

**A number of years ago Jim was kind enough to write a blurb for my book Abnormal Returns: Winning Strategies from the Frontlines of the Investment Blogosphere.