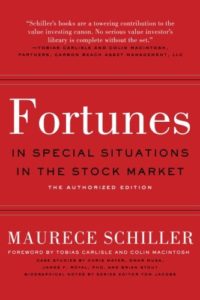 Labors of love in the world of financial publishing are few and far between. Most books are a conscious effort to generate leads and buzz. However the revival of Fortunes in Special Situations in the Stock Market: The Authorized Edition by Maurece Schiller is a different animal altogether.

Tom Jacobs of Huckleberry Capital Management launched a Kickstarter campaign to get back into print Schiller’s classic on special situations investing. At Fat Pitch Financials you can find a Q&A with Jacobs that helps explain his interested in reviving Schiller’s work including Fortunes in Special Situations in the Stock Market.

Along the way Jacobs garnered some backers including Tobias Carlisle, recently profiled here, and author of The Acquirer’s Multiple: How the Billionaire Contrarians of Deep Value Beat the Market  also wrote the intro to the book.

Below you can find my questions in bold. Tom’s (unedited) answers follow. Enjoy!

AR: There seem to be only a handful of classic investment books, two of which are by Ben Graham. Why do you think so few investment books have staying power and why is Fortunes in Special Situations worth revisiting?

TJ: There are the classics everyone acknowledges and then those that people read. We only read the few books that combine the author’s investment chops, enough experience in the field to put the work in context, and writing skill. Think of Peter Lynch’s two big books. So readable, so wise, so practical. But seriously, who really reads Security Analysis, cover to cover, in any of its editions? While many of us have read and reread The Intelligent Investor.

Schiller is tough going. Clear, sure, but very dry. He is what Graham meant when he called special situations suited to the “simon pure analyst.” But his goal is to teach, and this is fascinating. To follow this mind from 1955 to 1966 and see the development is a great joy. And I’ve never seen a value investor teach so well on arbitrage, hedging, and bonds and preferred stock.

The thing is that special situations work in every era because so few people have Schiller’s mindset. It’s worth revisiting because there’s no way around the work and no one who teachers it as he does.

AR: I am/was a big fan of You Can Be a Stock Market Genius by Joel Greenblatt which was published back in 1997. Now having read Fortunes it essentially is a modern retelling of the special situations story told by Schiller back in 1961. Any thoughts on the parallels?

TJ: Yes, absolutely. It’s a modern retelling, and extraordinarily well-written. For so many of us, opening Joel’s book was the beginning of a path to an entirely new world, like suddenly going to color in the Wizard of Oz when Dorothy and her band exit the forest.

There are some differences. You get bonds and preferreds in Schiller, for example, and not in Greenblatt. Schiller was a Director of Research and a registered rep. The books are his trade records, but we don’t have any portfolio returns. But with Greenblatt you have the younger Wharton grad who deploys the special situations tools and produces the incomparable returns at Gotham.

It seems to me not a stretch to say that Schiller is the theoretician, the investor who is more interested in the concepts than in making big money, a monk in his cell, but with mouths to feed. His professional colleagues achieved huge success at Goldman, Lehman and Bear Stearns. He inhabits the deep value and distressed world of Graham, Max Heine and others and then he takes the thinking further, gathering his own situations. But he’s happy to write his books, move to Santa Barbara, serve individual clients, and teach.

AR: Today investors seem obsessed with systematic strategies, like smart beta. Special situations are essentially the polar opposite. Do you think there is still room in today’s hedge fund-filled market, for special situation/event-driven investors?

TJ: Have you got that right! Smart beta, risk parity…today’s fad, tomorrow’s Long-Term Capital Management. That’s glib of me, but still. I can’t say they don’t work – what do I know? – but it just all seems like too much effort.

If you look at the scheduled presentations for the AAII (American Association of Individual Investors) chapters I’ve been privileged to address, the majority of presenters offer systems. Humans, which usually include investors, seem to need new toys. And apart from the genius of low-cost index investing, “systems” work until they don’t. It’s like Taleb referring to most market participants as picking up nickels in front of steamrollers. Even most who survive the steamroller move onto the next system only to be flattened again.

I do think there’s room for special situations today. Schiller calls them “the stock market’s symbol of individuality,” in just one of his rare and spot-on jewels. This is exactly why they always work. Most people have absolutely no interest in the work involved, and there is no way around Munger’s “assiduity” – sit on your ass and do it. This is why Joel can say in his Columbia Business School courses, “They worked then and they work now.” Everyone wants something for nothing. Special situations take work. They will always be available.

There is a catch. You see this on valueinvestorsclub.com. The best true special situations remain in smaller illiquid stocks. This makes it very hard to do once you have material assets under management. Certainly, there are large cap spinoffs that anyone can play, but the Schiller-esque special situations are reserved for those with less capital. He even writes that he had to create the liquidity for many of his trades. This is good for the individual investor in special situations.

And today with the number of publicly traded stocks about half or less of its peak level, there are even fewer options. But these things go in cycles.

AR: Jeff Gramm’s newish book Dear Chairman demonstrates that activist investing is nothing new. Revisiting Schiller’s book shows us something similar with special situations investing. Is there really anything truly new under the (investing) sun?

TJ: Ha, I hear you. We know that Graham was an activist in the 1930s with Northern Pipeline, though the term was likely not yet coined. And Schiller’s “appraisals” and discussions of other situations show clear opportunities for and existence of activism.

Today, courts have long since exited the business of determining fair values – appraisals – for mergers and acquisitions, for example. So it’s the Wild West – or Manhattan. The big funds have no options but to go activist at companies with enough liquidity for them. They can’t wait. They need calendar year returns to eat, get rich, and keep clients. But they are too big for the special situations that can bring time-specific returns.

What I got from Klarman’s Margin of Safety was his implied message that every era has its opportunities in investment vehicles that are “hot.” For example, special purpose acquisition companies (SPACs) provide unique opportunities via warrants, for example. This may be a vehicle used for many years or it may be a fad. Schiller, interestingly, focuses on what have been a precursor for SPACs and also on large cash asset companies, where he emphasizes in 1961, yet, the quality of management is the key. Sounds like SPACs to me.

Wall Street’s financial wizards will always invent new toys, and we can use them for our profit. So yes, there is always something they think is new under the sun. But value thinking doesn’t change. It helps us see the dangers.

AR: Getting this book republished was clearly a labor of love. What have you learned by going through the process? What do you want readers to get out of it?

TJ: It sure has. I’m so grateful to Kickstarter and other contributors who helped get these to the finish lines.

I think readers can get tons out of each book, but here’s something I’ll throw out there. It just occurred to me recently as I prepare the 1959 work, How to Profit from Special Situations in the Stock Market, for republication. I happened to be reading Rupert Hargreaves’ extraordinary series for ValueWalk on the great investors, particular Charlie Munger’s remarks about why Buffett invested so much like Graham early on and then changed.

Munger mentions how profoundly Graham was influenced by the Crash and Depression. This is well known. But less well known is that Graham as he aged grew farther and farther away from the almost religious deep value investor he’d been, not only to the “enterprising investor” but also “informed speculator” in The Intelligent Investor and elsewhere. I don’t think we can say either he or his student and employee Buffett ever embraced that, but they did evolve greatly. Most famously, we know that Buffett turned from the Strict School of Graham to the Munger-influenced era of great businesses with moats.

So too Schiller. His books detail his strict – obsessive – avoidance of risk, and his elderly children tell me how much he emphasized this at home. From his arrival on Wall Street in 1922 to his last book in 1966, we see repeated reminders that Wall Street was a den of thieves where pockets were regularly picked.

Schiller is the simon-pure analyst throughout his books, finding the calculable returns with the occasional what he calls “stock romance.” But then the 1959 book ends with “something doing” situations, where he says, all his criteria are met except that the profit is already defined. He’s starting to see opportunity beyond his strict pure special situations world. Then, in the 1961 book and thereafter, we see “new era companies,” “large cash asset companies,” and situations that emphasize excellent and unique management.

Well, what is going on? It’s a clear departure form specific, measureable returns in an identifiable period of time.

You could not live, let alone invest, during and after the Crash and Great Depression without their affecting you to your core. My Depression-era parents were always waiting for the other shoe to drop well into the 1980s. But Graham, Buffett and Schiller also could not ignore the enormous wealth creation of post-war technology boom in the US and the long bull market that lasted until 1972. Fortunes were made and not in pure speculation, either. They did not abandon “value” – not at all. But there was enormous wealth being created beyond, let’s say for Buffett, the looms at Berkshire and the “little melodrama” at Sanborn Maps. Buffett didn’t embrace so-called “tech,” but Schiller saw opportunity in “new era” companies even though they had little to do with his brand of special situations.

This is the real reward, getting to know the man through his work, absorb his own experience as a young man on the lowest Wall Street rung starting in 1922, and see his inventive mind essentially create a field himself and develop it in many directions. His works are not historical artifacts. They teach history, but they teach investing we can use today.

AR: Thanks, Tom. Good luck with the rest of the series!

*Tom was kind enough to send me a copy of Fortunes in Special Situations in the Stock Market: The Authorized Edition. You can read more about the project at MaureceSchiller.com.