When I get up and walk down the hall, it sounds a box of Rice Krispies being driven over. Being 88 years old is great.

That is up until a point. 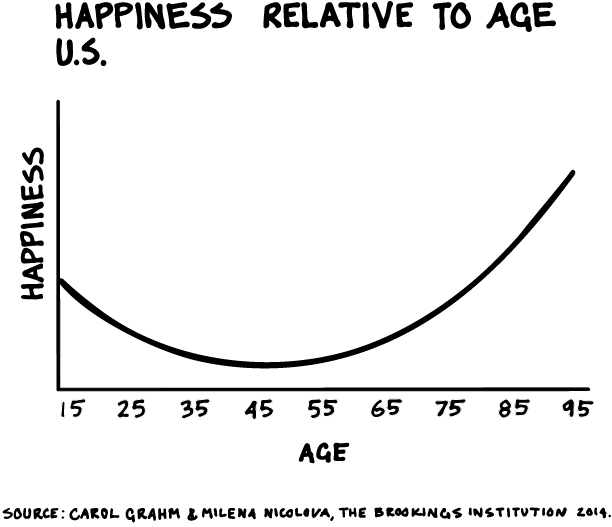 There is a lot of research that backs up this idea of happiness declining for the better part of four decades until we are solidly in our fifties. There are a number of reasons why our happiness, on average, traces out this U-shape. Financial Samurai proposes three reasons:

There is some evidence from primates that this dip in life satisfaction may be inherent, i.e. not a human construct. However at some point along the way the disappointments and hurt feelings from falling short of our youthful ideals begins to wane. Scott Galloway at L2 writes:

The curve of happiness is the shape of a smile. Youth is replete with beer, college, and making out. We then graduate to job stress trying to forge our career, and someone we love gets sick and dies. In our thirties and forties we realize we won’t be a senator or have a fragrance named after us. And then something happens — our satisfaction and happiness turns upwards as we age and realize we have so much to be grateful for.

The current generation of 45-54 year old, i.e. peak unhappiness, are also facing an unusual situation where their peak earnings years are not turning out to be as lucrative as previous generations. Robert Gebeloff at the New York Times writes:

The Grumpy Middle got to college around the time the drinking age was raised to 21 and were too young to enjoy all of the benefits of the booming 1980s economy, but old enough to have worked with older colleagues who could regale them with tales of how great things were for white-collar workers in the 1980s. And now they’ve reached their peak earning years, only to find they are no longer peak earning years.

Financial aspects aside, one of the benefits of becoming solidly middle age is that we can now:

W. Ben Hunt at Epsilon Theory writes about how we in the grumpy middle can re-orient our thinking. Hunt writes:

Being “someone who matters to the pack” is one reason why many individuals who have retired are now ‘un-retiring.’ This is one reason why the 65+ age cohorts are the fastest growing parts of the labor force. This movement is driven in part by money is likely for something else entirely: meaning. Robert Roy quoted in the Financial Times in discussing his time in retirement:

“something was missing. I thought, ‘what is my purpose in life?’” Work had been diverting. “You went to work, your day was defined. You remove that, all of a sudden, what did you replace with it? What’s next? What do I do?”

In middle age it easy to have an un-diversified life. There is little room for anything other than work and family. While it understandable why this happens it is not a recipe for happiness. Ernie Zelinski, author of How to Retire Happy, Wild, and Free, writes*:

Regardless of how talented you are and how successful you are in the workplace, there is some danger that you will not be as happy and satisfied as you hope to be in retirement…What may be missing is a sense of purpose and some meaning to your life. Put another way, you will want to keep growing as an individual instead of remaining stagnant. 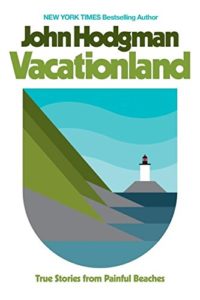 My suspicion on why it take so long for our happiness to bottom out is that all along the way we are in a battle with the image we have of ourselves. John Hodgman in Vacationland: True Stories From Painful Beaches talks about having a moment of clarity, smack-dab in the midst of middle age. Hodgman writes:

There are time when all the lies you have told yourself about yourself just fall away. In your twenties, you tell the lie that you are unusual, unprecedented and interesting. You do this largely by purchasing things or stealing things. In your thirties, you tell yourself the lie you are still in your twenties. Many in their forties, tell themselves the same lie, until a moment like this, and suddenly you see yourself clearly. (p. 183)

Clarity is hard to come by in middle age because we are dealing with an expectational double-whammy. Jonathan Rauch in The Atlantic, i.e. the best and most comprehensive piece on the subject of the U-curve, reviews the research on our lifetime happiness and finds two things going on in middle age that work against us. Rauch writes:

In other words, middle-aged people tend to feel both disappointed and pessimistic, a recipe for misery. Eventually, however, expectations stop declining. They settle at a lower level than in youth, and reality begins exceeding them. Surprises turn predominantly positive, and life satisfaction swings upward. And the crossover, in Schwandt’s sample, happened about where you would expect: in the 50s.

That crossover in expectations sounds suspiciously like something we experience in the financial markets all the time. The former high-flying stock  bottoms out as earnings expectations eventually catch up with reality. All of the disappointed holders sell out and the remaining holders are satisfied with the companies results modestly outpace expectations.

Our lives are not stocks. But expectations matter. The evidence on the U-curve in life satisfaction is overwhelming. If it doesn’t hit you smack dab between the eyes consider yourself lucky. We spend so much time planning our financial lives: saving, working, spending. We do little to plan for life’s inevitable shocks whether they be in middle age or in retirement. Just knowing about the existence of the U-curve will remind you that you are not unique and there is a reason for optimism on the other side.

*Hat tip: “It’s Not About the Money” at Of Dollars and Data.