The answer is probably no. Especially if they think they are going to be the hot, new money manager on the scene.

In the broad scheme of things, five years isn’t a particularly long time. Eric Balchunas who covers the ETF industry at Bloomberg recently said this in an interview with Dan Weil at WealthManagement.com:

In five years, I believe you’ll be able to have a full portfolio of ETFs for only 1 or 2 basis points. That will be good for investors, but rough for the industry. You will also see stuff put into ETFs that you didn’t realize was stuff. Anything in Wall Street brain cells will be ETF-ized. Probably 19 will fail, but the one that wins will keep the system going.

It’s really hard to compete with free. Robin Wigglesworth at the FT writes:

(T)he appetite for ETFs that simply track an index has also broadened over the past 12 months, and major providers such as Vanguard are slashing prices in an attempt to capture more of the money coming in. Industry chief executives and analysts say this will further squeeze the already-falling fees commanded by active managers who promise to beat the market. 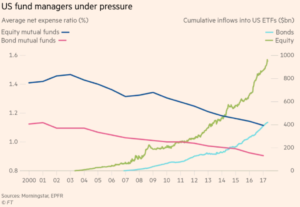 Landon Thomas Jr. in the New York Times has a great piece profiling Ronald S. Baron of the Baron Funds. Baron is an unapologetic active mutual fund manager with higher than average fees. To say that Baron’s timing for entry in the mutual fund business in 1982 was fortuitous would be a major understatement. Thomas Jr. writes:

It was the heyday of the individual stock picker. Peter Lynch at Fidelity and Bill Miller at Legg Mason gained cultlike followings, accumulating billions of dollars in assets and gracing the covers of the personal finance magazines that lionized them.

Nobody lionizes mutual fund managers anymore. Smaller fundamentally driven hedge funds are closing at a rapid rate. The big five ETF firms continue to gobble up assets. So from the perspective of a young, or not-so young, person intent on getting into money management the field is increasingly difficult and only likely to get all the more difficult to succeed.

Then again maybe we are asking the wrong question. David Snowball at Mutual Fund Observer read the same piece on Baron Funds and cut quickly to the chase. First, Snowball notes that fees do matter and there are cases where active managers earn their keep. Second, the focus on ‘beating the market’ is, at best, a distraction. Snowball writes:

(W)e’d suggest asking, “is this manager helping me achieve my life goals?” Unless you are a terribly sad and lonely person, you’re really not going to want “he outperformed the Dow by 0.25% annually over his long life” to be the first line in your eulogy. Market-beating means nothing! Losing 19% when the market loses 20% is nothing to cheer. Suffering vertigo and anxiety as your manager charges into, and beats, a foam-filled market is nothing to cheer. Beating the market steadily, whether by 1 basis point or 1000, tells us nothing about whether you’ve been able to lead the life you’ve aspired to. Focus, instead, on what’s meaningful: are you making steady gains of the sort that will allow you to enjoy life, to make a difference in the world, and be rich with friends and family? If so, you’re winning. Celebrate.

The intellectual challenge of the financial markets is undeniable to many. However it may not be all that meaningful, as Snowball writes. Someone looking to get into the industry can make the greatest impact not by managing money with the goal of besting a market benchmark by a few basis points a year but helping clients focus on those things that are ‘meaningful and achievable.’* For those individuals there will always be a role.

*For example, a recent study shows the impact of increased financial literacy on retirement plan savings.