Like it or not, we are all active investors. The only question is what kind of active bets are we taking. Which is fine. What is isn’t fine is trying to shade active investment calls as something other than what they are.

If you have been paying attention to the US stock market over the past few years you would know that the so-called FAANG stocks have been a key driver in the performance of the major stock market indices. This performance was so pronounced that many think these stocks are due for a fall. Which is all well and good. Stocks like Apple, Amazon, Netflix, Facebook and Google may very well underperform the market going forward. A rapid decline in the FAANG stocks could tip things into a bear market.

If that is your belief there are many ways to implement this idea. However using index ‘concentration’ as an argument that investors should swap out of their traditional, capitalization-weighted equity index funds swaps one type of risk for a set of other risks. Concentration is a feature of capitalization weighted indices not a bug. The best performing stocks, by definition, grow as a percentage of the index.

Research shows that the majority of US stocks have underperformed simple T-bills during their life as public companies. The US market’s returns since 1929 have driven by only a small percentage of companies. Missing out the performance of these companies puts the equity risk premium, which we are all trying to capture at-risk. Ask any active manager over the past few years how they have done if they have assiduously avoided the FAANG tocks.

Two recent articles argue that the big tech stocks are rising as a function of the shift to passive investing and that investors should protect themselves by de-concentrating their portfolios. James Stefurak at Enterprising Investor writes:

The performance in the major US indices is clearly attributable to a decreasing number of names. This narrowing has created a handful of market-cap behemoths. These “Godzilla caps” have endangered many “well-diversified” portfolios, making concentration risk much greater than it appears…

The market’s persistent climb creates a self-fulfilling prophecy wherein flows chase a few names disproportionately higher, with no regard to valuation.

Rick Bookstaber writing at his blog argues that the S&P 500 has become too concentrated in big tech and is headed for a reckoning. He writes:

This is a big concern now because of the run-up in the FAANG (Facebook, Apple, Amazon, Netflix, Google) and related stocks. They have taken a large share of market capitalization as they have risen in value, and there is a momentum dynamic to be unleashed if they start to drop. This has happened time and again when cap weighting has led to extremes in the share of total market capitalization claimed by a popular sector. Consumer discretionary grew to 22% of the index in 1972; Oil 30% in 1980; TMT 34% in 2000; Banking 23% in 2007. In each case it finally got out of hand and dropped back to its earlier level and dropped the market as well. The odds are it will happen with FAANG.

Both may be right about the future performance of the FAANG stocks. Both recommend similar solutions: something other than market cap weighted indices. Stefurak writes:

If you believe as I do that the market is near a peak, now may be a good time to put your portfolio on a low-cap diet.

If that’s truly what you believe then you should argue for reducing equity exposure. ‘Equal and reverse-weighted’ index ETFs won’t save your portfolio in a bear market. There are decent arguments for non-capitalization weighted indices. Recognize that these types of products have their own factor exposures. Bookstaber writes:

An alternative that has taken hold is to hold stocks based on some other factor that market cap. The problem is that any rule that is based on some factor is going to have the problem that you are still making a bet.

A capitalization weighted stock index is constantly in flux as companies rise, fall, enter and exit the index. That portfolio is a witch’s cauldron of factor exposures. Thoughtfully building a portfolio with targeted factor exposures is perfectly defensible. However it isn’t necessarily a defense against a decline in the FAANG stocks.

God only knows what the FAANG stocks will do going forward.* The best defense against a fall in the FAANG stocks is a TARGETED BET AGAINST THE FAANG STOCKS. If you want to make that bet, make it, but everything else is just talk.

*Then again, even God would get fired as an active manager. 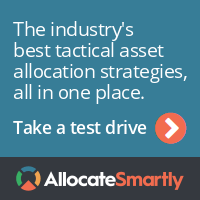