David Swensen and Warren Buffett are in a bit of a spat. Buffett thinks institutional investors, other than himself, should settle for the returns on low-cost, indexed investments like the S&P 500. David Swensen the head of the Yale University endowment fund disagrees. He writes:

The superior results of Yale and a number of peers strongly suggest that active management can be a powerful tool for institutions that commit the resources to achieve superior, risk-adjusted investment results.

Swensen in the 2017 annual report for the endowment comes to the defense of Yale and similar institutions by comparing their returns against standard benchmarks. (See below.) So far, so good.

However introductory investment practice would tell us that these comparisons are valid only if all these institutions took similar risks to achieve these superior results. A quick glance at the asset allocation of Yale shows big slugs of the portfolio in things like private equity and venture capital which by all accounts are riskier than the benchmarks mentioned in the Yale piece.

It may simply be the case that these elite institutions have more capacity to take on incremental portfolio risk. Tuo Chen in a paper in the American Economic Journal makes this very case. From the abstract:

“Everything else the same, the biggest endowment has a capital return 8% higher than the smallest endowment. However, after adjusting for risk using Sharpe Ratios, the strong positive correlation turns negligible or even negative. This result suggests that the higher return of bigger endowments can be attributed to risk compensation rather than to an informational premium.” 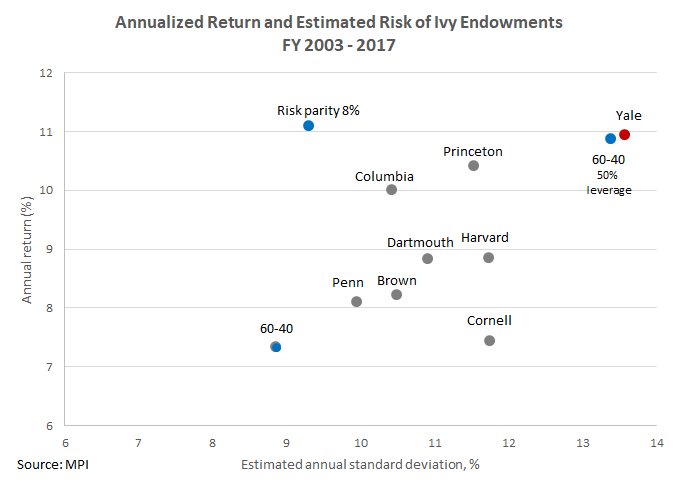 Embedded in the alternative investments that endowment funds are a whole host of risks and factors that are difficult to disentangle on first glance. The research firm MPI has done exactly this and found that Yale and its brethren do indeed outperform traditional benchmarks but they do so by taking on more risk.* They write:

So, when things are brought to the same common denominator – risk-wise – we estimate the Yale endowment performs (after fees) on par with a leveraged version of the 60/40 portfolio and underperforms an auto-pilot Risk Parity portfolio.  Though we believe there is a role for alternatives and active management in a portfolio, when we factor in risk to the Yale endowment performance puzzle, we’re on the side of Buffett in this duel.

Their analysis requires some assumptions and the like because the major endowment funds don’t release portfolio data or risk assessments. What is clear is that most stakeholders in and around these institutions don’t likely think of their portfolios in these terms, i.e. leveraged. They think of them as engaged in smart, considered active management.

Risk or active management? In the end, it doesn’t matter to Yale University because they have been able to consume the returns generated by Swensen and the endowment over time. However to others looking in there is the big difference. Julie Segal at Institutional Investor writes:

At the heart of the conflict is whether constructing bespoke portfolios using highly paid asset managers to search for esoteric investment opportunities is worth institutions’ time and money; or whether a simple portfolio can yield just as good, if not better, results.

You are beginning to see some calls for change. For example, a group of Harvard University alumni called on the endowment to replace hedge fund investments with low cost index funds like the S&P 500. This may be a exercise in late-cycle hindsight bias or it may be the beginning of a new trend. Either way the debate can’t move forward unless we can compare portfolio risk on an apples-to-apples basis. Something the endowment fund managers, to-date, seem unwilling to do.

*See also this piece from Portfolio Charts on the same topic.

**For those you not old enough “You Make the Call” refers to commercials IBM used to run during NFL games which would present an unusual play and ask the viewer to make the correct ruling. Apparently I am not the only one who remembers these ads.