GE ($GE) has been much in the news of late with a new CEO and big write-offs coming in the past week. The company’s bonds which were once rated AAA are now rated BBB+. Many of you who are either too young or haven’t been focusing on business and/or markets may not grasp the significance of it all. Today all we seem to do is talk about the FAANG stocks of the world. For good reason. However twenty years ago GE was all that and more. 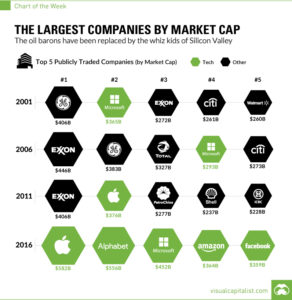 In 2001 GE was the largest company in the world by market cap. GE under Jack Welch was viewed as the top of the US corporate heap. Not just in market cap, but in management philosophy as well. Welch was every politican’s favorite CEO. GE executives were constantly poached by other companies to take over as CEO and provide struggling companies with some of that GE magic. Sometimes it worked, sometimes it didn’t. 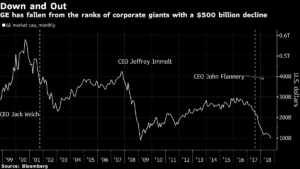 How times have changed. From the chart above you can see how just how far GE’s market cap has plunged from its apex. It would not be an exaggeration to say that not much has gone well for GE since 2000. Earlier this year, Geoffrey Colvin in Fortune did a deep dive into GE’s waning fortunes.* He wrote:

Inept capital allocation can be documented with hard data. Management of human capital and culture is much squishier but at least as important. It too was a contributor to GE’s collapse.

So what is the point of all this? It’s not to necessarily bash GE and its management. GE is just the latest cautionary tale showing that company success isn’t permanent. Chances are five or ten years from now, one or more, of the FAANG stocks will no longer be so dominant. If history is any guide the question isn’t if, the question is which one?

*Update: see also this piece in the HBR “Who Killed the GE Model?”