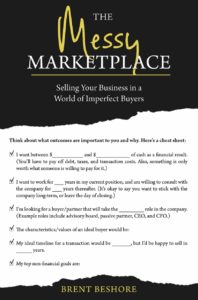 Most of what you read on Abnormal Returns is focused on the public capital markets. However the world of private businesses is both dynamic and important for the overall economy. It is not exactly news that there is potentially huge succession crisis as Baby Boomers reach retirement age without firm succession plans in place for their privately held businesses.

In The Messy Marketplace, Brent Beshore (@brentbeshore) takes the perspective of someone looking to sell a privately held business and walks them through the many steps (and pitfalls) involved with any sort of transaction. Brent can do this because as the founder and CEO of adventure.es, he and his team, have literally analyzed thousands of small and mid-sized businesses. Investing a few dollars and couple hours of time with Brent’s book is the very least a business owner should do before embarking on this type of journey.

I had to the pleasure to ask Brent some questions about his new book. Below you can find my questions in bold. Brent’s (unedited) answers follow. Enjoy!

AR: Why write a book? Is this a way of pre-screening potential sellers to make sure they are on the same page with you?

BB: I wrote the book I couldn’t find.

About two years ago the team at adventur.es surveyed the landscape and became disillusioned. We were looking for something to send to sellers that would capture the situation, the process, and what they should expect. What we found were not-so-subtle consulting invitations filled with half-truths and some outright lies. A clear exception was “HBR’s Guide to Buying a Small Business” by Ruback and Yudkoff. If you’re launching a search fund, go read it.

Since what we wanted wasn’t available, and we were spending a tremendous amount of time educating prospective sellers on the same mechanics, we decided to do something about it. That’s how we think about everything we write, including the book — it’s a way to scale conversation. We spill our guts, then ask the reader to respond. It goes a long way towards selecting for people we want to befriend. Attract the right people. Repel the wrong people, or at least the wrong people for us.

AR: They say that you really don’t understand how you think about something until you can write it down. What, if anything, did you learn in the process of writing the book that didn’t know or realize about the process of selling a business prior?

BB: When you do something every day, it’s easy to take for granted the nuance and how difficult it is to get any deal done.

Selling a business is unlike any other transaction. Even the most straightforward deals are messy because there are numerous opportunities to screw up, lose trust, and kill the deal. Only in the hindsight of writing the book did I realize the number of potholes. Each section of the book is a summary of how each party might screw up and what the other side can do to be helpful.

AR: A lot of investors say they are not concerned about talking about their strategies because the likelihood someone else will follow that strategy is unlikely. Are you at all nervous about giving away your secret sauce?

BB: Ha. The secret is there are (almost) no secrets. And, there’s certainly no secret strategy at adventur.es. What we do is simple in theory and punishingly hard in practice. It’s all judgment across probably four hundred decisions per deal.

We can pull back the curtain on the entire process and help “competitors,” and it has zero effect on the prospects for adventur.es.

AR: By all accounts there is a tidal wave of small and mid-sized business is this country with a succession problem. Is there sufficient capital from private equity/fundless sponsors/search funds/family offices to take up the slack?

BB: Yes, there’s a big problem brewing, a silver tsunami — the vast majority of profitable smaller companies are owned by those over the age of 55 and don’t have a viable succession plan. And no, there are not nearly enough buyers coming into the market. Most smaller companies get liquidated and shut down. As more sellers and relatively fewer buyers flood the market, the likelihood of this fate only increases. The big question is, “Why?”

To start, most small companies have massive key person risk. The owner is the leader, the strategist, the decision-maker, and the relationship holder. This creates a functionally unsaleable asset, especially if the business needs to be transitioned quickly.

The second major issue is that it takes time for buyers to build deal flow, experience, and infrastructure. This creates a timing mismatch between when viable deals are able to be done and when a new set of buyers are able to do them.

If a family office wanted to leap into the lower-middle market acquisition game, it would take millions of dollars and years to get things rolling. And, that’s just to buy one company. It’s a magnitude order harder to buy 2 to 3 companies, and it a magnitude order harder than that to develop an enduring organization that buys companies repeatedly.

AR: You talk a lot in the book about the emotional issues and challenges of selling a business. In your experience how much of the process is emotional and how much of it comes down to cold, hard cash?

BB: Everything yields to time and money, so if you have enough cash and are willing to pay up, it can overcome almost anything. As the saying goes, “A fool and his money are invited everywhere.”

The process is exceedingly emotional. At a minimum, the seller is usually playing a one-time game with the highest of stakes. This pressure creates challenges for even the most level-headed sellers. And remember, buyers are emotional creatures too, as are all the lawyers, accountants, and intermediaries involved.

All deals are emotional disasters, some of which get across the finish line.

AR: I loved these two quotes because they touch on truths for investors in both public AND private companies. 1. “There are no hard rules in valuation.” 2. “Future growth is unproven.” Care to explain?

BB: Most people get excited about the “low valuations” in smaller private companies. They read something that says the average multiple for companies under $2M of net income is 3.5X and immediately jump to the conclusion that it rains cash. Nothing could be further from the truth.

To start, most smaller companies require a tremendous amount of ongoing work. It’s not like buying stock in a public company. You’re usually buying an expensive job. When you back out the costs for sustainability, including compensation for separate leadership, oversight, and structure, the numbers look substantially less rosy. There are also transaction costs and pesky non-recurring expenses that seem to recur each year. Ultimately, the question is always, “A multiple of what?” Sellers want to sell the future, and usually a future that is projected to be a lot better than the past, with none of the costs associated with managing the investment.

AR: You include a chapter on the post-deal phase of selling a business. Is this aspect underplayed? Can this phase make or break the success of a transaction?

BB: Post-close is often overlooked because most people think the transaction is the finish line, whereas in reality it’s the starting line. The buyer-seller relationship always arrives at one of two destinations. Either the buyer does well with the company, which evokes seller’s remorse. Or, the company stumbles post-close and the seller thinks the buyer is an idiot. Either way, the situation is fraught with friction.

By acknowledging this ahead of time and playing out the scenarios before they happen, both sides can create some emotional space. There will always be differences of opinion and it’s important for each side to practice patience and give grace.

*Full disclosure: Brent was nice enough to spend some time with an undergraduate class I taught last year. He also provided me a review copy of the book to read.