If you could snap your fingers, Thanos-style, and accomplish one of these two things, which would you choose?

That doesn’t mean we shouldn’t provide everyone, from the high school level on up, with a decent education in the basics of personal finance. The asset management industry is putting forth more effort in trying to provide more financial education. The problem is that this additional effort isn’t sufficient to emphatically give us, as a society, better outcomes.

Here is why I would choose the second option: a universal fiduciary standard. The evidence indicates that it works. A recent research paper by Bhattacharya, Illanes and Padi shows that a fiduciary standard induces financial salespeople to act in a more client-focused manner. From their paper “Fiduciary Duty and the Market for Financial Advice“: 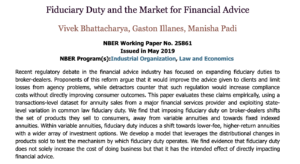 “It has the intended effect of directly impacting financial advice.” That’s what we need. This is most visible in the world of 403(b) plans where salespeople run roughshod over school districts and educators. Leslie P. Norton in Barron’s this weekend took a look at the abysmal state of affairs with the help of my colleagues Tony Isola and Dina Isola. Norton writes:

Teacher retirement plans, known as 403(b)s, are similar to private-sector 401(k)s, with one important difference: Because they evolved separately, they are exempt from protections of the Employee Retirement Income Security Act. That act says 401(k) plan providers have a fiduciary duty to participants—in other words, they have to put the investors’ interests first. Teachers’ 403(b) plans are sold directly to individuals, rather than to employers, so the interest of the salesman was coming first.

So despite the evidence in its favor, don’t hold your breath for much real movement on the fiduciary front, from the US Congress. In fact, it now looks like annuity salespeople are going to get their nose under the tent of 401(k) plans, as well. Dina Isola writing at Citywire notes how the incentives in Congress are not set up to favor the average consumer. In short, we have more questions than answers:

“Investment costs are at their lowest ever levels, so why is it that Congress sticks up for a business model that peddles egregiously high-cost products? If the goal is for Americans to be prepared for retirement, why allow them to be sabotaged by high fees? Why allow these salespeople to confuse the public into thinking that they are providing advice that serves the investor’s needs? Isn’t it better for the economy, the stock market and American citizens to have more money going to work to build financial security rather than subsidizing a dying business model?”

I am sympathetic to idea of giving individuals as much freedom as possible to do with their money as they see fit. This includes being able to invest in what they want, how they want to. However the weight of the evidence shows that left to our devices we will not make the best decisions for our own financial futures. A few years ago I wrote about the merits of a mandatory retirement savings program:

In an ideal world everyone would generate sufficient savings on their own to help fund their own retirement. However most of the data shows that Americans are simply unable to do this on their own. Nor is the current system of savings consisting of 401(k)s and IRAs doing the job either. The next few generations may now be facing increasingly difficult retirement scenarios. The question is whether instituting real changes now can help save future generations from a similar fate.

In Australia they have a robust, mandatory savings program. Guess which major country, after Switzerland, has the highest per capita household wealth? You got it, Australia. And by this measure of economic freedom, Australia ranks seven spots ahead of the United States. Said another way, government policies that nudge savers in the right direction need not obliterate our economic freedom(s).

Arguments for economic freedom are all well and good, until you realize that is often cover for those parties that don’t want to give the average American a fair shake. Let’s do everything we can to better educate Americans, both young, middle aged and old, on all matters, personal finance. In the absence of a well-educated populace, a true fiduciary standard would, at least, help level the playing field between the financial services industry and American consumers.

*Talk your book acknowledgement: our firm is a registered investment advisor and operates under a fiduciary standard with its clients.