“The simple but hard to follow rule is this: Only borrow money to buy things that go up in value.” – Seth Godin

In Europe, there is a bit of a backlash against SUVs (and flying*) due to their negative environmental impacts. Chris Bryant at Bloomberg notes how environmentalists are trying to shame SUV owners:

Shame has long been recognized as an effective tool for changing antisocial behavior. Back when we were hunter-gatherers, it helped tribes preserve social cohesion; being ostracized was potentially fatal and thus selfishness was best avoided.

You don’t need to buy into this approach to think carefully about how the car you drive affects the environment (remote) and your financial bottom line (proximate). For whatever reason there has been a series of posts of late touching on the topic of transportation costs.

But first, my colleague Ben Carlson writing a year ago at A Wealth of Common Sense shocked a lot of people by noting the high cost of buying a new SUV these days (not even including gas, taxes, insurance, depreciation, etc.) Ben wrote:

If you can right-size your housing and transportation costs on a monthly basis, everything else becomes easier from a saving and budgeting perspective (income is the third leg of this stool but that’s a topic for another day).

Ben rightfully notes that once that car is in the garage it now represents a fixed cost to you. As Michael Batnick at the Irrelevant Investor notes it is these fixed costs that can get us in trouble. He recently wrote:

The biggest takeaway for me after going through this exercise with my wife is that the fixed costs are what can get you into trouble. If you let these grow to be too large a percentage of your monthly income, the other things you do won’t really move the needle. I don’t know the right number for your fixed expenses, but less than 60% sounds about right. 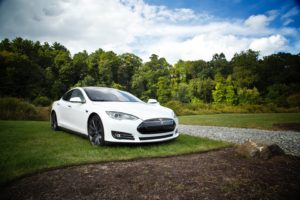 Photo by Matt Henry on Unsplash

The fact of the matter is that very few people NEED a luxury car to get around town. It may feel good, at least for awhile, but it is not a necessity. Jim Dahle at the White Coat Investor garnered some negative feedback when he wrote:

In that same vein, Jared Dillian writing at Marketwatch colorfully notes how a car is NOT an investment. It is as Seth Godin mentioned in the opening quote a depreciating asset. Dillian writes:

Unless you are driving a Ferrari a car is not an investment. A car is basically a huge waste of money.

Where else can you take $40,000 and set it on fire in seven years? And pay a bunch of interest to the bank in the process? What a disaster.

It could very well be that the person driving that super-luxury vehicle is barely hanging on financially. Pavithra Mohan writing at Fast Company debunks five myths about the wealthy – one if which relates to cars. Mohan writes:

If you assumed wealthier folks are more showy and, say, like to lease luxury cars regularly, that’s less common than you might expect, [wealth advisor Natalie] Schmook claims. Instead, they often go for cars that are less of a status symbol—a Honda Odyssey instead of a Range Rover, for example—in the interest of saving money and being discreet. In fact, millionaires more often drive a Honda or Toyota than any luxury car brand. “It’s a little more common to pick something that is below your means and not going with a brand name that screams you have money,” Schmook says.

Bob Lefsetz at the Big Picture gets a little more micro on the issue by recommending against ICE-powered cars:

Do think twice about buying an expensive gasoline car. Its value will decline precipitously over time. Better to lease. Or to jump into the electric game.

To put it all in perspective let’s check in with Jonathan Clements at Humble Dollar who has been grappling recently with some of the big questions around money and happiness. Clements on his car:

Fewer hassles mean greater happiness. When I was in my 20s, I owned a series of clunkers that turned every trip into a nail-biter. Would the car overheat? Would the electrical give out? Would the duct tape keep the front bumper attached?

Today, I own a 2013 Honda CRV. It won’t draw any looks of admiration. But unlike the cars I drove in my 20s, I’m fully confident it’ll get me from A to B. The CRV may not be a source of happiness, but I’m pretty sure it won’t be a source of unhappiness—and, in my mind, that’s a more valuable trait.

What Clements is saying that you don’t want to be driving a car that you need to play roulette with every morning hoping that it will start up. But going beyond the “will start every morning” category is likely to be money that won’t materially boost your happiness.

As with most things in life you are in charge of your own stuff. If you want to drive a new luxury vehicle, more power to you. Just realize that there are financial (and environmental) trade-offs involved. But don’t be under the illusion that anyone really cares what car you are driving.

*In Swedish: “Flygskam” or flying shame.