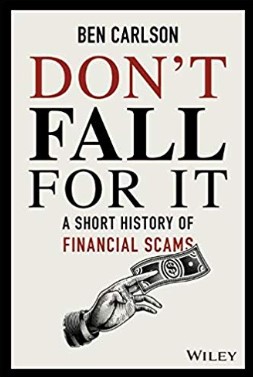 If you have read this blog for longer than a week you are already familiar with my colleague Ben Carlson’s work at A Wealth of Common Sense. Ben’s day job is as Director of Institutional Asset Management at Ritholtz Wealth Management. He also just published his third book Don’t Fall For It: A Short History of Financial Scams. (You can find links to all of Ben’s books here.)

In support of the book Ben recently made a trip to New York City to do some media appearances including on CNBC and Yahoo Finance. He also did a Q&A with Jane Wollman Rusoff at ThinkAdvisor. Fortune also published a choice excerpt from the book. Acorns also published three rules on how to avoid financial scams culled from the book.

I had to the pleasure to ask Ben some questions about his new book. Below you can find my questions in bold. Ben’s (unedited) answers follow. Enjoy!

AR: Why another book? Between blogging, podcasting (and tweeting) what was it about this subject that required a long form approach?

BC: Part of it was me selfishly looking for a new writing challenge. But the subject matter in this realm hit on so many topics I’m interested in – markets, human nature, behavioral economics, money decisions, and the motivations behind the actions of charlatans – that I felt is had to be longer-form. Plus I came across so many wild stories that it was difficult to figure out which ones to leave out.

AR: You note in the book that we all make money mistakes: nobody is perfect. In financial cons, the mistakes are often financially fatal. How can we arrange our financial lives so that our mistakes are of the non-fatal variety?

BC: One of the hardest things to do in almost any endeavor – investment management, blogging, running a business, etc. – is just staying in the game. Success stories are always sexier when they’re framed in terms of home runs and massive risk undertakings but the majority of people and businesses succeed not because they took great risks but because they diligently managed the risks they could control.

AR: When it comes to money matters, simplicity trumps complexity. However in most of the schemes complexity plays a central role. What is at work here?

BC: In the back of our heads we all would like to believe there is a secret, Holy Grail-type of investment or financial scheme that sounds too good to be true but maybe this one time, just for me, is the real deal. It’s much easier to be fooled by randomness when complexity is involved. And simple solutions are often too boring for most people so we latch onto stories and gut instincts in lieu of using our brains and common sense. Our desire for quick financial fixes can often lead us down the path to poor decisions and scammy people and services.

AR: Building trust is a big part of the sales process and that includes the con man’s game as well. How does affinity, i.e. religion, ethnicity, nationality, alma mater, play a role in this?

BC: We tend to do business with people we like and for many people that means finding people they’re familiar with. In Daniel Pink’s book, To Sell is Human, he points to research which shows people are more likely to do business with people who mimic certain actions or characteristics of the people they’re trying to sell to. In a tribal sense, our brains are still hardwired to trust those around us who are like us. So scammers are able to use who we are or the groups we identify with against us by putting people in situations where they’re more likely to put their guard down.

AR: There is an ongoing debate about the validity of financial literacy education. Many of the cons in this book fail the ‘basic math test.’ Is basic financial literacy a sufficient defense, or is there something else going on here?

BC: Education is no match for human nature and the power of incentives in most situations. Education can be a decent first step in terms of setting the right expectations when signing off on any financial transaction but people also need to be aware of the buttons a good salesperson can push to talk you into a huge mistake.The biggest leap forward for most people comes not just from education but building a solid decision-making process. Everyone should have some filters in place which force them to
say no more often to investments or financial transactions they don’t understand or can’t explain.

AR: One of my favorite stories in the book, is the one featuring Ulysses S. Grant and Mark Twain, in part because it has a (somewhat) happy ending. What was your takeaway with these two larger than life historical figures?

BC: Twain actually came up a number of times in my research about different scams and hucksters because he himself was terrible when it came to money management. Grant is one of the victims I felt the most sorry for in my research because he was such a decent human being who had that decency used against him. Grant is one of the most famous generals in our country’s history and a two-term president but he was no match for the siren song of a good story from a con artist when he tried his hand at the business world. My biggest lesson here was no one is immune to being taken advantage of.

AR: When talking about historical market bubbles, there always seems to be a new technology or innovation involved. In the past couple of years we had some micro-bubbles in fake meat and marijuana stock. Are there any other bubblicious innovations on the horizon?

BC: I think bitcoin or some other form of digital currency is ripe for chicanery. It has everything you need to invite bad actors: (1) a new and exciting technology, (2) promises of disruption and riches, (3) a mysterious creator and back story, (4) the potential to re-shape the financial system, (5) and an inherent boom/bust mentality.There could be a lot of money made in this realm in the years ahead but there is potentially an enormous amount of money to be scammed as well.

AR: Look for part two of our Q&A tomorrow!

*Full disclosure: Ben was kind enough to send me a review copy of his book.