“I once thought that there were no second acts in American lives, but there was certainly to be a second act to New York’s boom days.” – F. Scott Fitzgerald*

Fitzgerald was talking about New York, but the same can be said for American companies as well. A look at the chart below shows that it is not unusual for a company to be the largest by market cap, drop out of that position, and then comeback into the top position. In my mind, the most amazing of these comebacks is Microsoft. 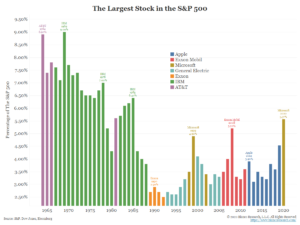 Microsoft in, and around, the Dotcom bubble was the largest company by market cap in the US. To be clear, Microsoft is not unique in going from number one on this list and then making a subsequent comeback. AT&T, Exxon and GE were all able to pull this feat off. What is fascinating is that almost two decades, and many fundamental technology cycles later, it is once again the largest company and now valued well in excess of $1 trillion. By any measure, the current CEO Satya Nadella who took over from Steve Ballmer in 2014 should be getting a lot more credit than he currently does.

Microsoft and the other Big Tech companies have fundamentally reshaped the nature of the top 10 companies by market cap in the US. John Rekenthaler in Morningstar looks at how a portfolio of these companies in 2020 has changed since 2010. For one thing ExxonMobil has dropped all the way from number one on that list to out of the top ten. See this BusinessWeek story on the downfall of the oil giant. More importantly as Rekenthaler notes:

So much for industry diversification! In 2010, there were two technology companies among the top 10 stocks, with the industry accounting for 24% of those assets. Today, the leaders’ list has five tech firms that possess 74% of the top 10’s total.

Research by Rob Arnott back in 2012 demonstrated that the largest companies, by sector and market, have a tendency to underperform going forward. However those results have been contradicted by the rise, and continued dominance, of Big Tech companies like Microsoft, Apple, Amazon, Google and Facebook.

My colleagues Michael Batnick and Barry Ritholtz in a recent video talked about how this crop of companies does seem to have some fundamental differences that the most dominant companies in the past. Now we search Google, scroll Instagram and shop Amazon all on our iPhones. Earlier generations interactions with IBM and Exxon were pretty limited. The bigger question is what happens if these companies continue to take mindshare on become an even bigger part of the major indices like the S&P 500?

Whether this wallet-share will be enough to keep these giant tech companies in the top ten by market cap for the foreseeable future remains to be seen. Stuff happens, tastes change, new technologies are developed. If nothing else, the past few months should teach us that the world can change in some very fundamental ways on a dime.

*Fitzgerald is know better for writing that “There are no second acts in American lives.” But that came from an unpublished manuscript. The quote above does appear in a published essay. As always, check your sources when it comes to seemingly famous quotes.