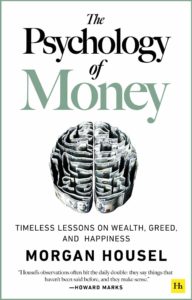 If you have read this blog for any period of time you are likely familiar with the work of Morgan Housel. You can find his regular writings here and he just published his first, and likely not last book, The Psychology of Money: Timeless Lessons on Wealth, Greed, and Happiness. It should go without saying that it is a must-read.

If you don’t feel like reading our Q&A, you can also hear from Morgan on some recent podcasts with Barry Ritholtz, Dave Perell, Anthony Pompliano and Ted Seides.

I had to the pleasure to ask Morgan some questions about his new book. Below you can find my questions, part one of two, in bold. Morgan’s (unedited) answers follow. Enjoy!

AR: You’ve been writing multiple times a week for well over a decade now. What itch does a book scratch that a post (or ten) can’t? Did you learn anything about writing that didn’t already know?

MH: I’ve joked that people take a blog post more seriously if you convert it to PDF — it becomes a “white paper” and people think it’s better. A book is that on steroids. People think words are more meaningful if you put them between two pieces of cardboard.

The upside of a book’s format is that people have more patience if they sit down with a book vs. scrolling twitter and clicking on a blog. So the author has more leeway to tell a longer story or dig a little deeper.

But the same rules apply to books as blogs: lose people’s attention and they’re gone for good. The book is 19 2,500-word chapters. So each chapter is the equivalent of about two blogs. And each chapter can kind of live on its own. I did it that way because few topics require 60,000 words of explanation. I’d rather make 19 points that people finish vs. one they give up on a quarter of the way through.

AR: You talk in the book about the importance of learn lessons through experience. The media is currently down on the surge in retail trading in the US, and elsewhere. I wonder how you view it?

MH: I would rather young people learn about investing the hard way vs. not having the opportunity to learn until they’re older and have more money, which is when salesmen smell blood. If young people are spending $300 to buy bankrupt Hertz stock, of course you know how that’s going to end. But maybe it’s better to learn the hard lessons of investing now than if they waited until their 50s and invested their kids’ college funds in a variable annuity or something.

On the other hand, Alex Kearns’ suicide this year after a Robinhood mixup shows investing isn’t a game. Investment companies shouldn’t just rest on “buyer beware” as a business model, especially when they’re marketing to the most vulnerable audience.

I don’t know where that leaves me.

AR: Once you see the impact of luck, and it’s many dimensions, it is hard to unsee it. (I have Michael Mauboussin’s book to thank for that.) Is there any aspect of luck that you think remains underappreciated?

MH: Investors are obsessed with risk. They hire risk managers. They have risk departments. They adjust returns for risk. But the same doesn’t happen for luck. No one hires a luck manager. No fund will ever report luck-adjusted returns.

But luck and risk are really the same thing, just in opposite directions. Both are the idea that things happen in the world that are outside of your control and can influence outcomes more than the conscious decisions you made.

AR: Your postscript talks about ten big economic lessons we have learned since WWII. If you were writing an 11th based on the pandemic today what would you write?

MH: World War II began 22 years after World War I. Most generals in WWII were soldiers in WWI. So even though the second world war was a surprise to the world, anyone over about age 40 remembered what a major bloody war was like. That didn’t make it easier, but there was some level of “here we go again …”

Covid-19 feels different, because major pandemics haven’t been part of our culture for almost 100 years. Polio in the 1950s and major flu outbreaks since didn’t shut down the global economy like Covid has. You have to go back to 1918 to find anything comparable. Which means hardly anyone alive today has ever seen, or experienced, what we’re dealing with in 2020.

Pandemics have to be one of the oldest risks to humans. But we became blind to them through lack of experience in the last 100 years. That’s good of course. But it leaves us more exposed to poor decisions and quack solutions.

AR: Between our misunderstandings of history, the importance of tail events and avoiding single points of failure, I kept coming back to the pandemic. Is there any particular aspect of 2020 that has surprised you and what have you changed in light of that?

MH: Covid is probably the first common enemy most of the world has been battling at the same time since 1945. I thought that would bring people together, like it did then. Maybe less partisanship? Less tribal bickering? More “we’re all in this together.” That’s what I expected. But I don’t think it’s happened. The political divide seems worse today than it was in February. Social media and cable news may have broken people’s typical response when these kinds of things occur.

AR: Look for part two of our Q&A tomorrow.

*Full disclosure: Morgan was kind enough to send me a review copy of his book.