“Information has gone from being illuminating to being a source of risk, and not because of content, but because of the vagaries of what might gain traction.”  (Rick Bookstaber) 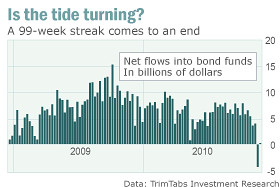 Investors have begun to pull money out of bonds funds.  (Mark Hulbert)

Markets are climbing a wall of worry.  (Big Picture)

Generational highs are always worth keeping an eye on.  The case of cotton.  (Adventures in Capitalism)

You would think that commodity-focused hedge funds would have had a better year.  (FT)

If you think Brazil is free of China-risk, think again.  (The Reformed Broker)

For all the equal-weighted ETF lovers out there.  (IndexUniverse)

Much to its detriment, “The VXX is forever rolling down the futures curve.”  (Falkenblog)

An overview of the growing VIX ETP space.  (IndexUniverse)

The art of not trading.  (Milk Trader earlier Kirk Report)

According to one manager the global macro opportunity set is expanding.  (Market Folly)

Keeping an eye on the unwinding of the US dollar-backed carry trade. (AR Screencast)

Closet indexing continues to flourish in the mutual fund world.  (All About Alpha)

Is ConocoPhillips (COP) a good way to play a bounce in oil?  (YCharts)

Why do the big studios hate Netflix (NFLX)?  (TechCrunch)

Build America Bonds as a subsidy for California.  (Bruce Krasting)

On the challenges of going from the sell-side to venture capital.  (peHUB also Rational Irrationality)

The “mosaic theory” of research is apparently under attack by the FBI.  (Dealbook, WSJ)

John Kinnucan on why he chose not to ‘wear a wire.’  (Dealbook)

TARP is “only” going to cost $25 billion.  (WashingtonPost)

Consumers and small business are beginning to feel it.  (The Reformed Broker also Daniel Gross)

Traffic continues to point toward an economic recovery.  (Abnormal Returns)

Americans are once again spending money in restaurants.  (Carpe Diem)

Economists are searching far afield for a model to explain the post-crash world.  (WSJ)

“Crony capitalism” explains some of the big paradoxes of our age.  (Macroeconomic Resilience)

QE2 isn’t helping consumers all that much.  (Dealbook)

Portugal is next in line for a bailout.  (Pragmatic Capitalism, FT Alphaville, Bespoke)

What do you do after you’ve made a zillion dollars?  (James Altucher)