Warren Buffett, “Money will always flow toward opportunity, and there is an abundance of that in America.”  (Berkshire Hathaway) 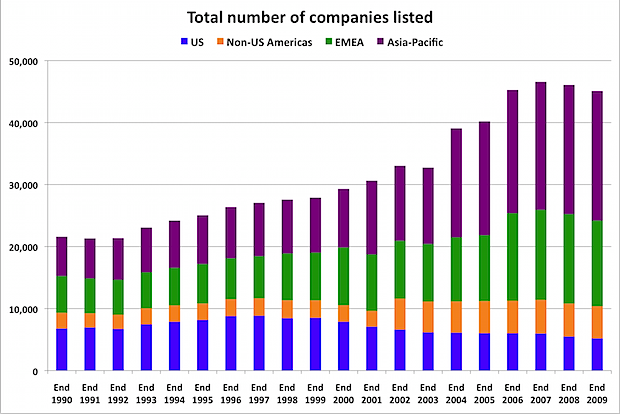 The US is a shrinking part of the global listing pie.  (Felix Salmon)

Uh oh.  “Sheepish bulls” are getting back into the stock market.  (WSJ)

A sense of caution, except for energy, in the sector charts this week.  (Dragonfly Capital)

March is poised to be volatile on the macro front.  (Money Game)

Putting the matter of P/E ratios into perspective.  (Derek Hernquist)

Is the age of quality stocks finally here?  (Barron’s)

The freedom to trade comes at a costs.  (The Reformed Broker)

Managing risk vs. making the call:  what matters most for a trader?  (Finance Trends Matter)

The math behind the reopening of the Market Vectors Egypt ETF (EGPT), whenever that happens.  (IndexUniverse, Kid Dynamite)

Warren Buffett is on the look out for more megadeals.  (Dealbook, Street Sweep)

Warren Buffett has a friend in the Fed.  (Dealbook)

Berkshire Hathaway as a measure of the state of the US economy.  (Real Time Economics)

Buffett on the coming recovery in housing.  (Calculated Risk)

The ten most systematically risky financial firms in the US.  (voxEU)

A mutual fund with a negative expense ratio?!?  (CBS Moneywatch)

How long before Amazon (AMZN) starts handing out Kindles for free?  (The Technium via kottke)

Justin Paterno, “I’ve never seen a company with so much competition coming from so many angles.  These days, it’s tough being Google (GOOG).”  (Justin Paterno)

The Russian stock market as a not-so stealth oil play.  (the research puzzle)

Russia still trades at a significant discount to other emerging markets.  (Barron’s)

Some statistics on the movie popularity and the Oscars.  (William M. Briggs via Flowing Data)