Felix Salmon, “Greece can fall and the eurozone can still survive. But Italy — which is just as politically dysfunctional as Greece — can’t. Which is why those Olympian forces will ultimately spell the end not only of Greece’s membership in the euro, but also of European monetary union more generally.”  (Reuters) 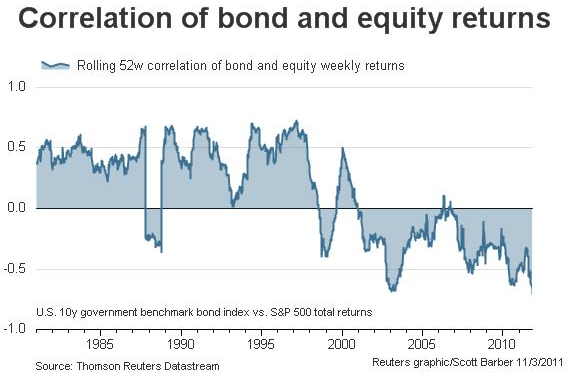 The lost decade and structural break in stock-bond correlations.  (Reuters via @scottybarber)

When risk and return don’t match up.  (SurlyTrader)

The US stock market has become more volatile than the Chinese market.  (Bespoke)

Interloper, “The market then, is not rigged against your investment success– you’re brain is.” (The Interloper)

Gold miners are no longer a leveraged play on gold.  (The Reformed Broker)

On the dangers of trading in the pre-market (or post-market).  (Kid Dynamite)

On the challenge of variable trade sizing.  (Tyler’s Trading)

Eight things Apple ($AAPL) should do with its cash.  (I Heart Wall Street)

Should Apple pay a dividend?  (The Tech Trade)

Things are not getting better for the global reinsurance industry.  (The Source)

Is Groupon going to price above the range?  (Term Sheet, Felix Salmon)

Banks are “raining assets” in an effort to reduce risk.  (WSJ)

Too many startups or too few venture dollars?  (Information Arbitrage)

Measuring the performance of the Ivy Portfolio.  (dshort)

Why investors are so willing to pay high mutual fund fees – they never see them.  (Wealthfront)

How can investment advisors live with themselves?  (Economic Intersection)

The Greek endgame is near.  (MarketBeat)

The Italian engame is near.  (FT Alphaville, The Source)

Will the ECB step up its purchases of troubled sovereign debt?  (Gavyn Davies)

The Fed keeps cutting its estimates for growth.  (The Atlantic)

Should we fear the drop in gasoline consumption?  (Bonddad Blog)

What we need to fix the economy.  (Money Game)

Why a trip to the grocery store is costing more these days.  (Points and Figures)

On the dangers of US biofuel policies.  (Big Picture Agriculture)

Nothing in excess, including momentum strategies.  (Abnormal Returns)

Only YOU can control your checkbook.  (Bucks Blog)

Why we need arts majors.  (Economist)

In praise of cheap wine.  (Slate)