Apple is no stranger here to us at Abnormal Returns as we have written about it extensively.  This week we have seen another burst of Apple posts driven by this graph of Apple’s P/E ratio over time: 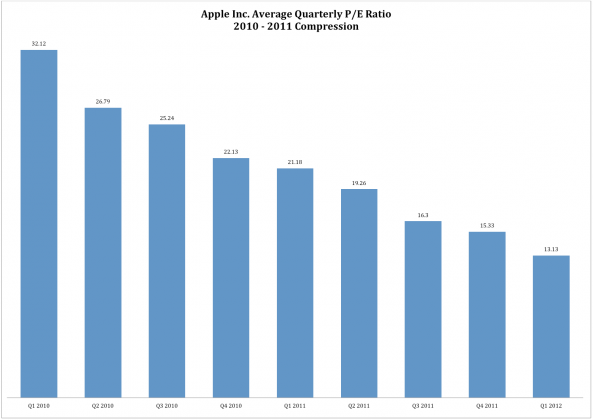 Even if Apple can meet its earnings projections for the next year, the climb higher will get tougher and tougher and the probability of meeting expectations goes down. Doubling $100 billion is much more difficult than doubling $1 billion. So while Apple owners may feel that the contraction of the earnings multiple is unfair, the market has spoken. It may feel unjust, but only price matters.

Research indicates that the largest company in a sector tends to underperform that sector for up to a decade.  Maybe the situation is just that simple.  Apple is now a megacap with the largest market cap in the sector.  The stock is already a favorite with hedge funds.  And it will require big products that the company is famous for introducing, like a new take on the TV, to move the needle appreciably.

Apple is no longer the scrappy company that produces ads based on 1984.  In a certain respect Apple now is the establishment.  In its chosen markets Apple is the leader.  That is why other smartphone carriers target them in their ads.  That is not to say that the stock can’t outperform in the future, it just means that is going to be increasingly difficult for it to do so.

Apple is the most undervalued stock in America.  (Bullish Cross also Felix Salmon)

How much value is the market putting on Apple’s ($AAPL) cash?  (Felix Salmon)

At least one analyst thinks Apple should trade below its cash value.  (Apple 2.0)

Why the market has such a tough time believing megacaps, like Apple, can maintain their growth.  (The Reformed Broker)

Is Apple too big to succeed?  (World Beta)

[earlier] The big difference between Apple and Amazon.  (Abnormal Returns)

*No position in Apple stock.  Long all manner of Apple products.