Why do universities have endowments?  Tyler Cowen, “Because they can.”  (Marginal Revolution) 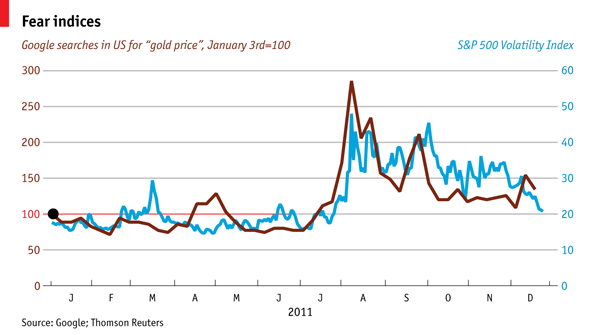 The correlation between the $VIX and Google searches for gold.  (Economist via Clusterstock)

Is the Treasury bull market over?  (Crossing Wall Street)

You can’t create a new trading algorithm without a little “play, courage and guesswork.”  (Bigger Capital)

How to set (and adjust) stop loss orders.  (Dragonfly Capital)

In search of the origins of low volatility investing.  (Falkenblog)

If 2012 is the year of a housing comeback, home remodeling stocks could outperform.  (The Reformed Broker, MarketBeat)

The case for Dreamworks Animation ($DWA) as being undervalued.  (Whopper Investments via @geoffgannon)

The shadow banking system is as big as it has ever been.  (FT)

Don’t think you can understand a manager’s process just by examining his returns.  (the research puzzle)

The Sequoia Fund has the kind of portfolio Warren Buffett would have if he ran a mutual fund.  (Bloomberg)

Not your typical ETF closure.  (Invest With An Edge)

A tick up in weekly unemployment claims.  (Calculated Risk)

Where you think the unemployment rate is going is dependent on a changing labor participation rate.  (Liberty Street Economics)

How pension plans and Social Security differ on their effect on the economy.  (Felix Salmon)

Is the era of subsidized corn ethanol finally over?  (Big Picture)

Why have blogs “enriched the debate” in economics but not in other fields?  (Economist)

As social media grows a need to filter becomes all the more important.  (Economist)

Advice on how to be a landlord.  (Megan McArdle)