According to Bespoke the S&P 500 is up some 20% in the past year which also happens to mark the beginning of the Occupy Wall Street. Given this run in stock prices it is worth checking in on the valuation of the market.

Eddy Elfenbein at Crossing Wall Street looked at the P/E ratio of the S&P 500 since the late 1980s. He shows that today’s valuations are at levels now lower than most of this 20+ year period. 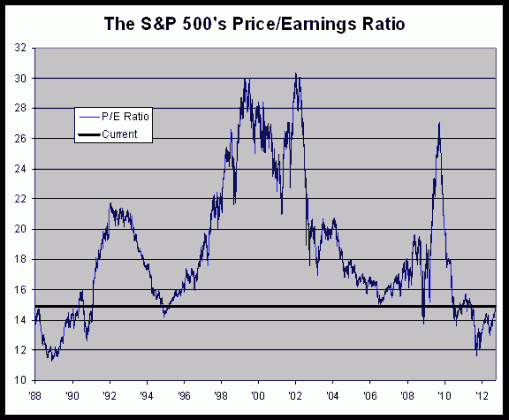 Ed Yardeni at Dr. Ed’s Blog in a recent post looked at the P/E ratio on the S&P 500 since the onset of the financial crisis. It just so happens that a P/E ratio in the range of 11x to 15x captures the activity of the market over this time. Taking into account the recent rally the S&P 500 is now trading smack dab in the middle of the range.

Another measure we have looked at in the past is the Morningstar Market Fair Value Graph. Again the recent rally has pushed valuations up toward fair value. A longer term look at the measure shows there is still room to run to the upside, but the big undervaluation seen in 2011 is now gone.

A more sobering look at valuation comes from the Robert Shiller-inspired CAPE ratio. Michael Tarsala at Covestor notes how this measure is in its highest quintile, i.e. overvaluation.  Then again, this measure has shown the market to be overvalued for some time now, absent a brief dip into undervaluation in 2009-2010.

What does this all add up to? The stock market has worked off what was a year ago what was an undervalued situation and is now sitting in the middle of its recent range. Per recent history the market could continue higher based upon further QE-inspired optimism. However it should be noted that third quarter earnings are expected to show a decline, something we have not seen in awhile. As for longer term it really depends on your perspective. Interest rates are by all measures are near historical lows which would seem to be supportive of higher equity valuations. Then again corporate profit margins are at record highs as well. If this measure were to mean-revert earnings would come under pressure.

All of these measures can be helpful in putting recent market moves into perspective, that is bouncing from undervalued to fair value. However making any big picture, long-term sort of call based on valuations at this point would be foolhardy. Given the unprecedented macro environment, including the recent announcement of QE3, it would be difficult to argue with a great deal of conviction that valuations need to rise, or fall. For now playing thing in-between and saying “I don’t know” when it comes to the long term valuation question makes the most sense for now.