Stephen Gandel, “Saying leveraging up your portfolio is safe as long as you buy bonds, is just the type of talk you would expect at the end of a bond bubble.”  (@stephengandel) 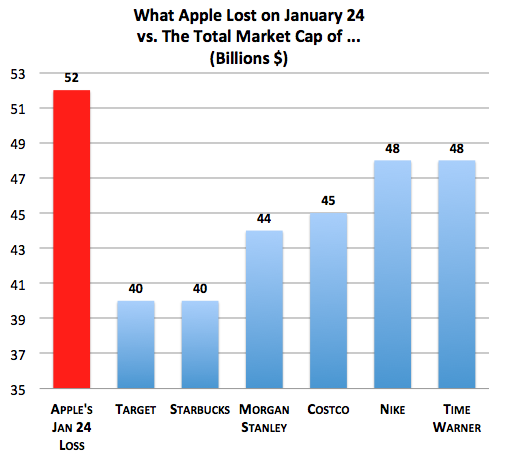 Putting Apple’s loss in market cap into perspective.  (The Atlantic)

More signs that risk aversion is on the wane.  (Sober Look)

There’s no such thing as “house money.”  (Howard Lindzon)

How to sort strategies.  (Cassandra Does Tokyo)

There’s nothing wrong with Apple ($AAPL) besides its stock price.  (Slate also SAI)

Is the luxury goods boom finally over?  (Fortune)

Why Bank of America ($BAC) should spin-off Merrill Lynch.  (The Brooklyn Investor)

Can the SEC go from reactive to proactive with a new head?  (New Yorker)

The pivot from finance to startups is trickier than it looks.  (Dealbook)

Charlotte is competing as a finance hub on its lower cost of living.  (Businessweek)

How the ETF price war is helping…advisers.  (The Reformed Broker)

Twenty years in the ETF has been a resounding success.  (Economist)

Has the rise of indexed ETFs changed market structures?  (FT)

A study in economic contrast: Germany and the UK.  (The Source also Quartz)

China’s college graduates are getting pretty picky about jobs.  (NYTimes)

Can Canada manage itself out a housing bubble without much damage?  (The Atlantic)

Conflicting signals on the health of the US manufacturing sector.  (Real Time Economics)

How self-driving cars change everything, including infrastructure spending.  (Felix Salmon)

We don’t know if half of our medical treatments work.  (Wonkblog)

Your home’s next thermostat will be “connected.”  (GigaOM)