Risk parity has been all the rage. The risk parity wave even hit the pages of USA Today earlier this month. and was in the Wall Street Journal today. In the meantime the strategy has come under a great deal of scrutiny due its generally poor performance during the run-up in interest rates this month. Leading commentators like John Rekenthaler and Michael Santoli have weighed in. Tom Brakke at the research puzzle posted a chart showing the performance of a handful of risk parity funds of late. 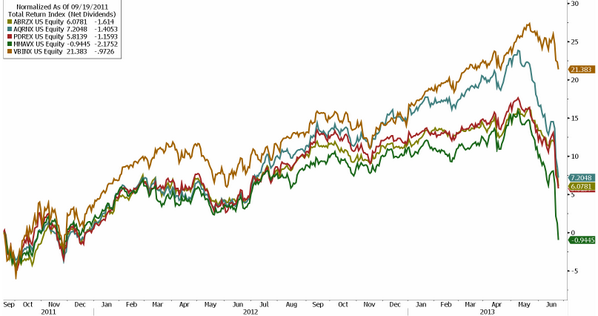 In light of this relative underperformance a good old fashioned balanced portfolio looks good. One of the key tenets of risk parity and most other asset allocation strategies is diversification. While a 60/40 portfolio is no slouch one can easily argue that additional diversification, including the rebalancing opportunities they represent, can add value over time. Diversification is no panacea as this month as shown but it hard to argue what the alternative may be.

The pursuit of a better ‘all weather portfolio‘ is not going to end with risk parity, nor should it. But investors should temper their expectations thinking there is some mythical strategy that will protect them from down markets while generating good relative returns in up markets. Perhaps a strategy that focuses more closely on tail risk is a better alternative that one that focuses on volatility. One can easily argue that with the market having repriced all risky assets that now is in fact a good time to invest in a risk parity strategy.

It’s like that the advocates of risk parity strategies have oversold their benefits. We investors are often guilty of fighting the last investment war. At the very least investors considering risk parity need to understand the underpinnings of the strategy. None of this should be new news. The downside of risk parity was laid out years earlier by Ben Inker at GMO who wrote back in 2010:

The only portfolio that every investor could logically hold is the overall market portfolio. Anything else is a kind of active management, and coming up with a set of fixed asset class weights and calling it a strategic benchmark is no less active than something more dynamic. While investors need to take advantage of risk premiums if they are going to have any hope of meeting the targets they have set for themselves, those risk premiums can neither be assumed into existence nor counted on to continue because they were there in some historical backtest. Concentrating on those assets offering valuations consistent with a decent return provides the best hope of success, and the point of a benchmark should be to encourage managers to do just that. No particular fixed weight benchmark is a good solution for all time or all environments. Risk parity portfolios are  no exception.

As we have said before alpha is promised to no one and risk parity is no exception.

Items worth a look:

How one hedge fund strategy is like the Steve Carrell character in every movie.  (Buzzfeed)

The case for (real) diversification.  (The Reformed Broker)

Tail-risk parity: the quest for a crash-proof portfolio.  (Pragmatic Capitalism)

The myth of the all-weather portfolio.  (Abnormal Returns)

On the dangers of fighting the last investment war.  (Abnormal Returns)