‘Tis the season. Marc Levinson’s The Box: How the Shipping Container Made the World Smaller and the World Economy Bigger ended up on Bill Gates’ list of the top seven books of 2013. 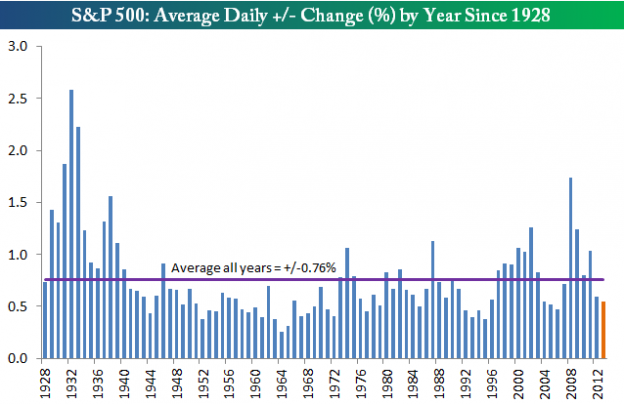 We are now in the historically best time of the year for the stock market.  (Crossing Wall Street, Ryan Detrick)

There’s more to valuation than the Shiller CAPE ratio.  (The Reformed Broker)

There is still plenty of room for global payout ratios to rise.  (FT Alphaville)

Hedge funds are warming to the opportunity in CMBS.  (NetNet)

The stock market’s surge has put corporate pension funds back on a more solid footing.  (WSJ)

Spotify is now free on mobile.  (Pando Daily, The Verge)

VCs are now betting big on the Bitcoin universe.  (Dealbook)

The drop is gold is putting pressure on Sprott Inc.  (WSJ)

Herbalife ($HLF) is trying to hit Bill Ackman where it hurts.  (Buzzfeed Business)

Is low-vol now a crowded trade?  (Focus on Funds)

Vanguard is now in the low vol fund game.  (Vanguard)

The ETF Deathwatch for December 2013.  (Invest with an Edge)

Some marquee open-end funds are closing their doors.  (InvestmentNews)

Stanley Fischer is the presumed new No. 2 at the Fed.  (Wonkblog, WSJ, Businessweek)

What you may have missed in our Wednesday linkfest.  (Abnormal Returns)

The Apple Macbook Air is still the best laptop out there.  (Paste)

A gift guide for the traders, investors and analysts in your life.  (Barry Ritholtz)