Count Airbnb amongst the growing class of ‘unicorns.’ That is, companies that have raised venture capital rounds at valuations in excess of $1 billion. In fact, Airbnb according to a WSJ report at a valuation closer to $10 billion. This puts a valuation on the company in excess of publicly traded lodging companies like Hyatt Hotels ($H). 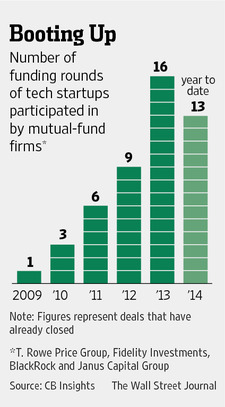 There are three ways of looking at this trend. The first is that this is simply business as usual. Fund managers have always had the ability to invest a certain portion, usually 15%, of their fund in illiquid securities. These pre-IPO shares are definitely illiquid but represent a first look at what are likely to be IPO candidates in the very near future.

The second way to look at this is that it represents the froth in the venture capital market and the mutual fund complexes are ‘dumb money’ who are likely to be left holding the bag when the inevitable decline happens. As Grind writes:

Another fear among some analysts is that this rush into pre-IPO stocks has echoes of the 1990s dot-com bubble, when many fund managers got badly burned by ill-timed moves into technology shares. Janus and Fidelity had funds that suffered large losses in the dot-com crash.

There is a third explanation. The mutual fund companies have very little choice but to venture into the pre-IPO share waters. Private companies are staying private longer and garnering valuations that previously would have represented values seen in initial public offerings.

The fact is that the number of publicly traded companies in the US is shrinking. The pool of large, liquid high growth companies is in decline and companies like Airbnb and the now public Twitter ($TWTR) and Facebook ($FB) represented unique opportunities whether they were private or public.

There are no guarantees these investments will eventually pay off for the big fund managers. For example there is talk that the much-hyped mobile payments company Square is trying to sell itself amidst continuing losses. You don’t have to ascribe muddy thinking or bad intentions to the managers buying pre-IPO shares. In reality they are just fishing in a shrinking pool of securities. Who can blame them for searching more promising waters?