“The active management industry today is bigger and more competitive than it was 30 years ago, so it takes more skill just to keep up with the rest of the pack.”  (Knowledge@Wharton) 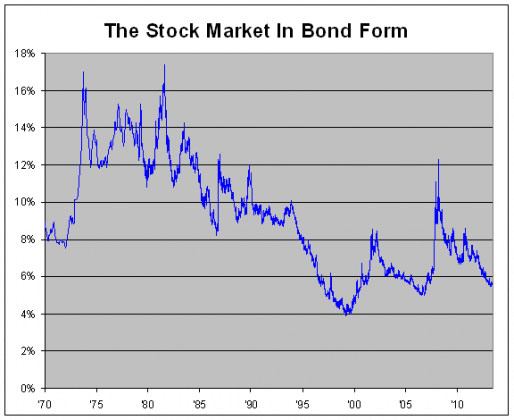 What if the stock market were a bond?  (Crossing Wall Street)

What the market does after chopping around for awhile: not much.  (Ryan Detrick)

How have mortgage REITs done of late?  (Minyanville)

The rebalancing debate isn’t much of a debate.  (Rekenthaler Report)

Twitter ($TWTR) earnings were something to be desire. Now the bull case.  (Recode, Medium)

Apple’s ($AAPL) fair value hasn’t changed all that much.  (Musings on Markets also See It Market)

Elon Musk, CEO of Tesla Motors ($TSLA), has a knack for getting other to fund his businesses.  (Daniel Gross)

Want to make money in technology? Become a CFO.  (Quartz)

Banking is getting boring and that is a good thing.  (Bloomberg View)

Five ETFs you probably haven’t heard of before.  (ETF)

Why interest rates could remain low for a long, long time.  (Martin Wolf)

Europe is having a “credit-less” recovery.  (Sober Look)

Why Italy’s economy is so slow to change.  (WSJ)

The nine stages of the ‘Piketty Bubble.’  (FT)

What you may have missed in our Tuesday linkfest.  (Abnormal Returns)

Why initial successes are so important. Also the ‘Pied Piper’ effect.  (FT Alphaville also A VC)

What Midwesterners consider to be the Midwest.  (FiveThirtyEight)