Joshua Brown, “Portfolios are now free – valueless. Advice, on the other hand, is invaluable– but only if it’s delivered with meaning and when it counts.”  (The Reformed Broker) 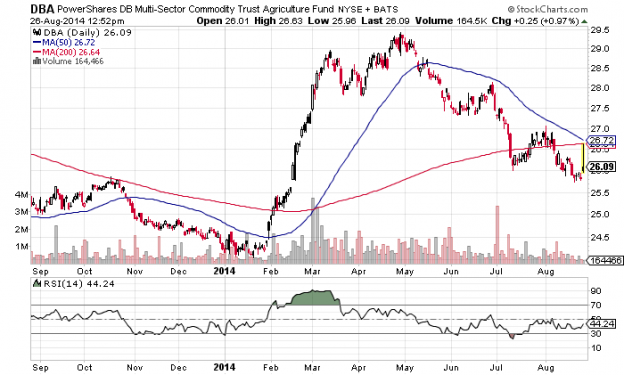 Agricultural commodities seem to be bottoming out.  (Barron’s)

Where are we in the credit cycle?  (Aleph Blog)

Successful investing is more about avoiding mistakes than anything else.  (ThinkAdvisor)

It’s rarely a good idea to make a decision based on a single data point.  (Bucks Blog)

A look at Guy Spier’s The Education of a Value Investor.  (BeyondProxy)

Will anything really come of the Apple ($AAPL)-IBM ($IBM) venture?   (Monday Note)

An interview with Horace Deidu about the coming new iPhone and iWatch.  (Eric Jackson)

Regulatory arbitrage is a waste of everyone’s time and talents.  (John Kay)

Why are alternative asset mutual funds still so expensive?  (Morningstar)

The ETF Deathwatch for August is out.  (Invest with an Edge)

According to Case-Shiller the rise in home prices is slowing.  (Calculated Risk)

What you might have missed in our Monday linkfest.  (Abnormal Returns)

What does the Twitter “favorite” button actually do?  (Farhad Manjoo)