Martin Wolf, “Almost nothing in economics is more important than thinking through how companies should be managed and for what ends. Unfortunately, we have made a mess of this. That mess has a name: it is “shareholder value maximisation.”  (FT) 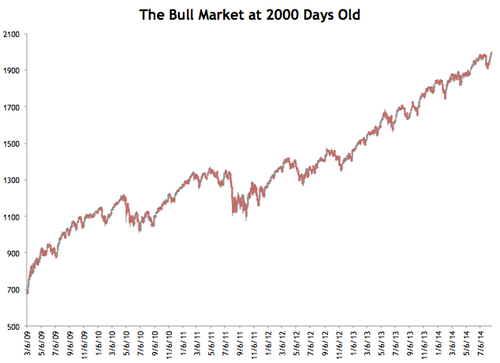 This bull market is 2000 days old and has survived any number of calamities.  (Scott Krisiloff)

Industrials have been underperforming all summer.  (Humble Student)

We should not be surprised that different sectors shine at different times.  (Crossing Wall Street)

On the attraction of “behemoth stocks.”  (Aleph Blog)

A simple switching model between value and momentum.  (Alpha Architect)

Risk control vs. risk avoidance.  (A Wealth of Common Sense)

Active vs. passive is the wrong question: cost is what matters.  (Rekenthaler Report)

The active vs. passive debate has become tiresome.  (Capital Spectator)

Are we thinking about Amazon ($AMZN) the wrong way?  (stratechery)

Why everyone is seemingly to high on Mobileye ($MBLY).  (Quartz, Business Insider, Marketwatch)

SnapChat has reportedly scored financing at a $10 billion valuation.  (WSJ)

Why it is not surprising that Canada will be the home of the new Burger King ($BKW).  (Dealbook, Wonkblog)

Nontraded REITs are likely to see some restrictions on their sale.  (WSJ)

China is full up with grain crops.  (WSJ)

Why the current economic recovery could have some room to run.  (Pragmatic Capitalism)

What you might have missed in our Tuesday linkfest.  (Abnormal Returns)

Six things to do in your early 20’s.  (Millenial Invest)

Can a sports team have too much talent?  (Well)

On the value of a personal blog.  (A VC)