As I discuss in my book, and in this Q&A with Wes Gray of Alpha Architect, it is difficult to be a value or momentum investor because both styles undergo periods of significant underperformance. The psychological pressure on investors during these periods is significant and can unseat them from their chosen strategy.

After a nearly six year bull market in domestic stocks and a unusually long time since a 10% correction it feels like risk has been banned from the stock market. However investors should take a look at history to remind themselves that drawdowns happen. As Ben Carlson at A Wealth of Common Sense writes:

Losses are a normal part of a well-functioning market. Without occasional losses, stocks wouldn’t earn a risk premium over safer asset classes such as bonds and cash. Take a look at this chart I made which details the worst drawdowns* on the S&P 500 every single year since 1950: 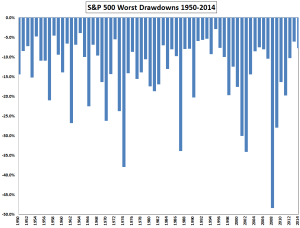 In other words, risk premiums exist for a reason. Investors are required to experience risk, i.e. drawdowns, from time to time. Each cycle is different but they all at some point punish investors. As David Merkel at the Aleph Blog writes:

Risk premiums exist to compensate good investors for bearing risk on “money good” investments through the risk cycle, and occasionally taking a loss on an investment that proves to not be “money good.”

Who knows when the next 10% correction, or 20% bear market will occur. I am sure Jesse Felder would like the prior to happen sooner rather than later. In any event it is good to remind ourselves of these facts before they occur rather than during the drawdown. Because when the actual drawdown happens you will have other things on your mind.