It’s difficult to understate the impact of Vanguard on the investment management business. The only shareholder-owned mutual fund company has led a revolution in investing. First the introduction of the index fund for individual investors. Second the relentless pursuit of lower cost investing.

One could argue that the existence of Vanguard is evidence enough for the Cost Matters Hypothesis. This clever turn of phrase is essentially a restatement of William Sharpe’s piece in the Financial Analysts Journal entitled “The Arithmetic of Active Management” in Sharpe writes:

One need not rely on the Efficient Markets Hypothesis to argue for passive, low cost management. One need only recognize that costs play a crucial, limiting role on the effectiveness of active management. The irony is that Vanguard is one of the few mutual fund companies that is still garnering significant inflows into its actively managed funds.

Eric Balchunas at Bloomberg argues that the meta-trend isn’t from actively mutual funds into passive index ETFs. Rather it is from high cost to low cost. Balchunas states:

This focus on fees can be seen in the graph below showing the estimated fee revenue per billion of AUM for various investment vehicles. The differences are stark. 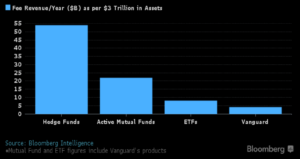 By this measure Vanguard is saving investors billions in fees each and every year. Jack Bogle at the Spring 2016 Q-Group meeting he talked about the difference between algorithmic quants and arithmetic quants. Bogle notes:

Arithmetic investing, then, has a huge advantage in costs over algorithmic investing, both in dollars ($83 billion per year!) and ratios (292 basis points). These two approaches to money management are polar opposites. The pool of assets managed by the algorithmic quants is run by (largely!) brilliant managers, many with Ph.Ds, and most with a complex quantitative approach that uses multiple equations. They are academic to a fault. Their brilliance dazzles even the vast corps of the financial engineers of our universities who emulate them. They assume extra-market risks and typically demand—and receive— very high compensation for their work, 2% of assets and 20% of returns ain’t hay!

At the other extreme, of course, are the Vanguard index funds. They have no manager in the conventional sense. Their math is arithmetic, not calculus. They assume only market risk, neither more nor less, and they charge fees that are too small to be believed. And so the battle is joined. The heavily armed and armored hedge-fund Goliaths versus the simple unencumbered index fund David. Who will better serve the long-term investor?

In many respects the CMH has become consensus. The onus is now on high cost managers to justify their fees. The fact is most can’t. Jack Bogle’s career has been the epitome of doing well by doing good. Vanguard’s crew members have done well over time by relentlessly focusing on lowering costs while increasing options for its investors.  We can learn a lot from Jack Bogle and his career but this idea of doing well by doing good is one to keep top of mind.

You can watch Jack Bogle’s entire speech below or read a transcript of it as well: “David and Goliath: Who Wins the Quantitative Battle?”

David and Goliath: Who Wins the Game of Quantitative Investing? from V-cube USA on Vimeo.

You can support Abnormal Returns by visiting Amazon, signing up for our daily newsletter, liking us on Facebook or following us on Yahoo Finance, StockTwits and Twitter.