The evidence is in. Shooting a free throw underhanded, or “granny style,” provides the shooter the best possible odds of making a free throw. Physics proves it. However nobody in the highest levels of basketball, or at least until last month, shoots free throws this way.

One of the greatest free throw shooters ever, Rick Barry, is an outspoken advocate for the underhanded free throw. You can see in this video that no active players are willing to take up the cause. In this episode of Revisionist History, Malcolm Gladwell looks at why, Wilt Chamberlin, a notoriously bad free throw shooter took up and then abandoned the underhanded free throw. In short, why do basketball players, especially centers, avoid using a superior tactic?

Gladwell argues these players are passing up points, playing time and money to hold to their views. But this type of behavior is not uncommon in sports. It is now common knowledge that football coaches are giving up potential points by not going for it more often on fourth down. Baseball managers have until recently have been unwilling to put on defensive shifts to try and offset the strength of pull hitters.

What does it mean for investing? The evidence is in. Active management, as currently practiced, has a very low likelihood of success. As Jeff Ptak writes:

It appears that average pre-fee excess returns have declined and the variation among funds has narrowed. This will present new challenges to investors who select active funds, the fund companies that offer the funds, and the boards charged with overseeing them. With low-cost index funds and ETFs now readily available, each of these stakeholders must adapt. In all likelihood, this will mean lower usage of active funds among investors and consequently a shake-out of the active fund industry, which will have to slash costs and shrink.

None of this should be surprising to the fund management industry. The shift from high fee, actively managed funds to low cost, passive funds has been going on for some time now. 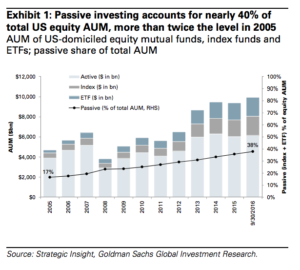 It isn’t surprising that index funds have reached nearly 40% of total US equity assets. What is surprising is that it took so long. 40 years ago detractors called the first retail index fund, the Vanguard 500 Index fund, “Bogle’s Folly.” Today index funds represent an existential threat to the established money management business.

There is no shortage of advice out there for active managers. For example David Snowball at Mutual Fund Observer writes:

Note to fund advisors: you’re in imminent danger of becoming the abandoned, sand-filled squatter toilets of the financial services world. If you aspire to better, you need to listen to your investors, to let them know that you’re listening, and to rebuild the relationships that you severed when you became hostage to third-party distributors like Schwab and Fidelity.

Active managers, it’s over to you. Cut your fees and charges, and you might just give yourselves a fighting chance of actually adding value.

In a Q&A with Jason Voss at Enterprising Investor C. Thomas Howard argues that active management in and of itself isn’t the problem. The problem is with how the industry has gone about implementing the various strategies. Howard says:

Given the opportunity to manage portfolios based on their preferences, the vast majority of fund managers would deliver superior performance to investors. Those funds that don’t asset bloat, benchmark track, or over diversify do generate superior returns. It is into these truly active funds that investors should put their money. But alas, the industry is structured to incent funds to become closet indexers, the very value destroying entities investors should avoid.

This jibes with what Barry Ritholtz at Bloomberg View says in noting the need for investors in active strategies to be vigilant. He writes:

There is a place in portfolios for active investing, but it is fraught with pitfalls. Proceed with caution.

One myth that is frequently referred to is that if everyone indexed, who would take the other side? The implication being that increasing indexing activity will at some point in the future sow the seeds of its own demise. Cullen Roche at Pragmatic Capitalism argues that this is unlikely to occur. Roche writes:

The bottom line is, most passive investing means there will be greater demand for active managers in the form of market makers and arbitrageurs.  The ease of passive investing is made possible thanks to these active underlying elements.  And that’s great because it’s a win win.  Indexers get a low fee and easy way to access markets.  But they also bear the cost of their laziness (in numerous unseen ways) which is why making markets in index funds is hugely profitable.  So, if everyone indexed then that much more active market making would be required.  End of story.

That isn’t the end of the story, because we are only going to here more and more as index funds becomes ever more popular. The problem for active managers is that this popularity has been earned fair and square. Barbara Novick writing at the WSJ sums it up nicely:

Index funds help all investors participate in these important investment opportunities. They offer market returns at low cost and democratize access to diversified investment portfolios to a degree that was at one time unreachable for the everyday investor. Can these funds continue to be improved through more efficient operation and more effective engagement or corporate governance? Certainly, but not by eroding the very qualities that have made them such an attractive option for the average investor.

It can sometimes take a long time (40 years!) to convince people to do what it’s their best interest. In the case of underhanded free throws the message never really gets through. Luckily for a growing number of average investors the argument for indexing has been getting through.