Sometimes things change slowly in the stock market. Sometimes they change quickly. For example, last week I noted the release of the 2017 Credit Suisse Global Investment Yearbook. In it the graph below shows the dramatic changes in industry composition of the US and UK stock markets over the past century-plus. 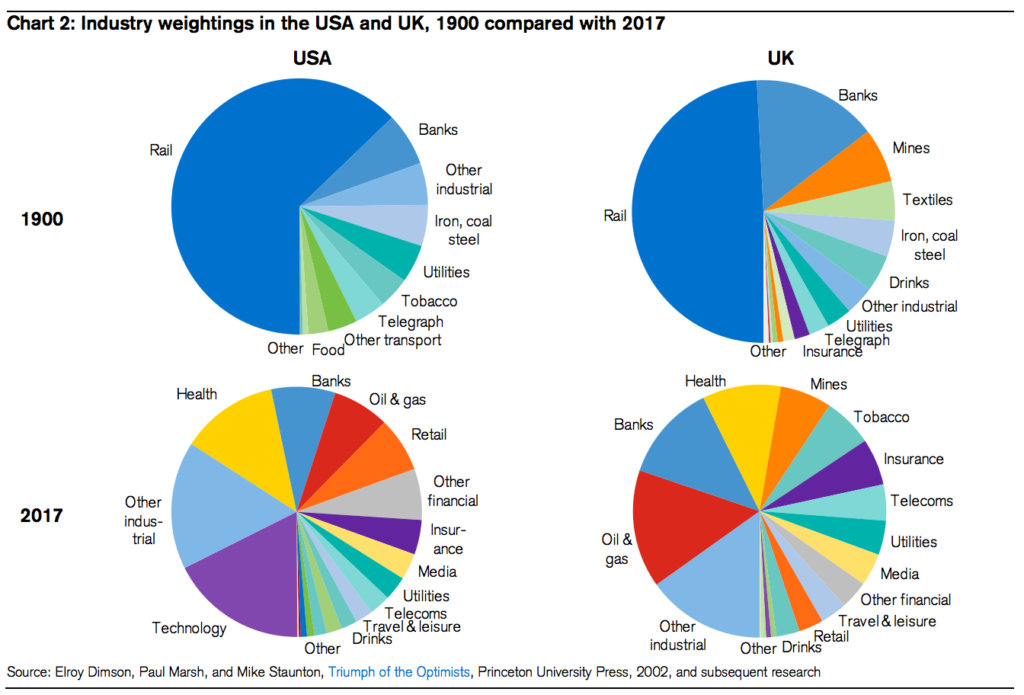 This graph should be enough to put you off any historical market analyses that compare the valuation of the S&P 500 or any other such index from 1900 to today. Michael Batnick at the Irrelevant Investor lists another bunch of reasons why valuations today should be higher than in prior eras including:

Reg FD, which mandates that all publicly traded companies must disclose material information to all investors at the same time, did not exist until 2000! Investors like transparency and are willing to pay a higher price for it.

Jesse Livermore at Philosophical Economics in a recent post describe the process by which investors can continue to push up to (and past levels) seen at the beginning of prior bear markets. Rather than butchering Jesse’s argument find below a couple of key excerpts:

It’s important to remember that as long as cash is yielding zero or something very low, there’s no arbitrage to force asset prices lower, no dynamic to force them to conform to some historically observed level or average.  They can go as high as they want to, and stay as high as they want to, provided investors are able to develop and retain the confidence to buy at those levels.

That isn’t to say the stock market couldn’t decline (dramatically) from today’s levels. If something breaks the circle of confidence holding investors on their current path then there is (substantial) risk in today’s market environment. Livermore writes:

All the while this is occurring we are in the midst of what one might describe as a new industrial or information revolution. Americans now spend up to 5 hours per day on their mobile devices. These type of numbers would have been unfathomable ten years ago before the launch of the Apple iPhone. Nobody could have guessed that an Uber driver could buy a share of Snap for a $0 commission on his iPhone. The point being that we really aren’t all that good at forecasting what the future will look like.

Shane Parrish at Farnam Street talks about how long it took for the printing press and telegraph to truly change the world. It took time, hard work, infrastucture and a changed mindset for these devices to become truly revolutionary. The same could be said for the Internet as well. During the Dotcom bubble of the late 1990s it was clear to many the Internet would change the world. The only question was how and when. Only now are we seeing the fruition of some of those early ideas. Parrish writes:

But looking at these two technologies [printing press and telegraph] serves as a reminder of what revolutionary means in this context: The use by and value to society cannot be anticipated. Therefore, great and unpredictable shifts are caused when they are adopted and integrated into everyday life.

The Internet has changed society and it has changed the stock market. A world of zero interest rates can be reversed. However the technological changes wrought by the Internet cannot. That is why naive valuation analyses that compare 2017 to 1997 or 1897 are a waste of time. They either represent naive analysis or worse confirmation bias. Investing is difficult enough, using only a rearview mirror makes it all the more difficult.