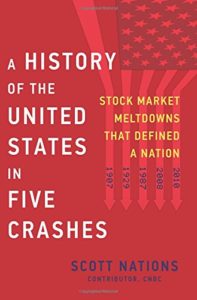 Stock market crashes hold a huge space in the collective space of investors’ brains. A new book by Scott Nations entitled A History of the United States in Five Crashes: Stock Market Meltdowns That Defined a Nation shows the import of stock market disruptions on our economy and politics.

One reason why stock market crashes stick with us is due to the fact that we humans are by our nature pattern-seeking fiends. We are so good at finding patterns that our brains are capable of finding them when they are not even there.

There is a cottage industry of analysts and bloggers putting together charts that show the parallels between today’s stock market and 1929, 1987 or [insert scary year here]. Urban Carmel at the Fat Pitch notes that a surge in bubble talk was present earlier in this bull market: 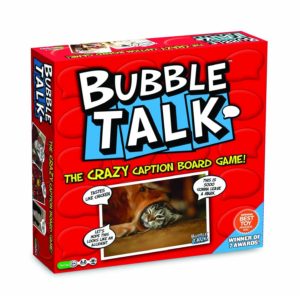 The bubble talk, no not this Bubble Talk, was so thick in early 2014 that I was able to compile Ten quotes on the question of financial bubbles. This quote from Phil Pearlman may be my favorite because it recognizes the psychological power bubbles (and subsequent crashes) have on on us:

“So we had these two gigantic bubbles and we were all affected and the culture was affected and yet we don’t really acknowledge how affected we were and how the remnants of those events shade our interpretations of present experiences.”

It’s funny but there is an actual debate about the existence of bubbles. One academic camp says bubbles are not real. Because they are only identified in hindsight they cannot logically exist. Markets can greatly increase and crash but that does not mean they necessarily were bubbles.

Another academic camp acknowledges that bubbles aren’t necessarily easy to identify in real-time. However there are some common characteristics of markets that run up quickly and subsequently crash.

Robin Greenwood, Andrei Shleifer, and Yang You in their HBR Working Paper entitled “Bubbles for Fama” dispute the notion that bubbles can’t/won’t/don’t exist. From the Abstract:

We evaluate Eugene Fama’s claim that stock prices do not exhibit price bubbles. Based on U.S. industry returns 1926–2014 and international sector returns 1985–2014, we present four findings: (1) Fama is correct in that a sharp price increase of an industry portfolio does not, on average, predict unusually low returns going forward; (2) such sharp price increases predict a substantially heightened probability of a crash; (3) attributes of the price run-up, including volatility, turnover, issuance, and the price path of the run-up, can all help forecast an eventual crash and future returns; and (4) some of these characteristics can help investors earn superior returns by timing the bubble. Results hold similarly in U.S. and international samples.

Most market participants would side with Greenwood et al. that bubbles, in some form or fashion exist. One need only look back to the Japanese stock market of 1989. Urban Carmel at the Fat Pitch in a great post shows the scope and scale of Japan’s stock market (and real estate) bubbles. Carmel writes:

The Nikkei stock index rose more than 900% in the 15 years before it crashed. That stock frenzy was driven by investor euphoria much like the one the US experienced in the 1990s, powered by a belief that Japan Inc. was on the way to taking over nearly every major industry worldwide. And the stock bubble was further fueled by a massive real estate bubble twice the size of the one the US experienced in the 2000s. In short, it was the product of a tsunami of monumental and concurrent events.

Unlike Greenwood et al., Morgan Housel at the Collaborative Fund in his white paper entitled “The Reasonable Formation of Unreasonable Things” takes a uniquely non-technical look at the reasons behind financial bubbles. Morgan notes that bubbles are a feature, not a bug, of financial markets. He argues that trying to model bubbles is a effort ultimately doomed in practice. I recommend you read the whole thing but here are some key quotes:

Bubbles aren’t so much about valuations rising. That’s just a symptom of something else: Time horizons shrinking. This might seem like subtle point, but it explains a lot about why the mere existence of bubbles confuses so many smart investors.

Bubbles do damage when long-term investors mistakenly take their cues from short-term traders.

Few things matter more in investing than understanding your own time horizon and not being persuaded by the price actions caused by people with different time horizons.

Housel argues that understanding why bubbles happen is a great help when it comes time for investors to structure their portfolios with the long run in mind. You may not avoid bubbles in your investing lifetime but you will be forewarned about their potential and armed with a strategy to follow over the long term.

Crashes, at least epic, economy-altering ones, are not supposed to happen all that often. As Michael Batnick at the Irrelevant Investor points out:

We’ve already experienced two market crashes in the twenty-first century, which is why some people feel that the next bear market will look like the previous two episodes. And while a third crash is 100% possible, I don’t think it’s probable.

Just because it is unlikely does not mean it is impossible. Batnick argues that thinking through a crash scenario is worthwhile not matter the current prospects. Just because you are not some aspiring market timer does not mean there is nothing you can do in the meantime.

Jonathan Clements writing at Humble Dollar goes through the risks facing the US stock market due to slow economic growth and elevated levels of corporate profits. That all being said Clements is not one to shout fire in a crowded theater. Instead he highlights three risks to investors and what they can do about them.

First, there’s the risk we could get a sharp market decline. If you have money you’ll need to spend within the next five years, it should be out of stocks and invested in nothing more adventurous than high-quality short-term bonds.

Second, there’s the risk that the market rally has left you with more of your portfolio in stocks than you intended. Consider rebalancing back to your target portfolio percentages.

Third, there’s the risk you’ll end up amassing less for retirement and other long-term goals than you had hoped, because stock returns over the next decade prove disappointing. Worried that rich valuations will mean low returns? As always, your best defense is a healthy savings rate.

Financial cures are few and far between, but keeping your spending below your income is, as Clements notes, key. For young investors a market decline, not necessarily crash, can be a boon to long term outcomes, provided you can keep investing given your positive savings rate.

As noted earlier, talking about bubbles is the world of financial bloggers and academics, fun. Just last week I had a post up on the digital currency/cryptocurrency boom. At least with recent bubbles/crashes like 1989 Japan and 2000 Dotcom there was a way to measure the deviation of the market from some reasonable valuations. With things like Bitcoin and Ethereum there is no established benchmark of value. So in the case of these digital currencies (and others) we will just have to wait and see whether today’s bubble talk was near the mark.