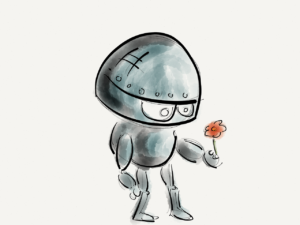 We humans are a proud lot. Even when it is shown that an algorithm does a better job than humans exercising their own judgment we still tend to prefer human decisions, i.e. algorithm aversion. Walter Frick at HBR writes:

When asked to explain themselves, the most common response from participants was that “human forecasters were better than the model at getting better with practice [and] learning from mistakes.” Nevermind that algorithms can improve, too, or that learning over time wasn’t a part of the study. It seems our faith in human judgment is tied to our belief in our own ability to improve.

Given that we humans have an aversion to cold, hard algorithms it is amazing that robo-advisors have become so quickly a part of the investment landscape. Written in 2011 (and published in 2012) in my book I wrote:

We have seen some tentative steps taken to provide investors with algorithmic investment services. This represents a natural evolution for the investment business because much of the everyday work inherent in investing can be done algorithmically. And it represents another way in which algorithms have become a part of our lives, oftentimes without our knowledge. More sophisticated, automated investment plans will make life easier for a wide swath of American investors who would be happy to take routine, everyday investment decisions off their plate. Automation or not, investors need to educate themselves along the way. It will allow us to spend more time thinking about the bigger, more impactful questions surrounding money.

The shift towards robo-advice was kicked off by the venture backed startups like Betterment and Wealthfront but has been accelerated by industry behemoths like Schwab and Vanguard. Alex Eule in a review of robo-advisors in Barron’s this past weekend wrote:

“It’s hard to underestimate the broader impact Betterment has had on financial advice in the U.S…Says Betterment founder and CEO Jon Stein: “For me, one of the most satisfying results of the work we started seven years ago is seeing the entire industry change.”

The most surprising part of the rise of robo-advisors is that they are getting average American investors to essentially trust their hard-earned savings to an algorithm. There are humans behind the investment models these firms put together. But by and large the portfolios they assemble use passive investment vehicles like ETFs and are non-discretionary and make few strategic changes over time.

In short, investors are choosing models over their own, or other financial advisors, judgment. Mark Rzepcynski at Disciplined Systematic Global Macro View writes:

Rules and models are good and their value is well-documented, yet many do not want to follow them. Thinking about this issue, the aversion to rules may be related to the price of optionality associated with switching the decision process or dropping an algorithm. Individuals may not have an aversion to a model but aversion to binding behavior or a lack of flexibility.

The genius of robo-advisor may not be in the automation, low costs or professionally built models but in convincing investors that giving up some flexibility and binding their behavior is in their own long term financial interest. This is in part accomplished by giving individual investors some input into their risk profile and investment options.

Most, if not all, robo-advisors give investors at the front-end of the onboarding process some ability to tweak their inputs. This may be in terms of choosing their risk profile, excluding certain asset classes or including particular strategies like those that have an ESG-focus. This discretionary component fits with the research that shows that people are more willing to use algorithms if they have the ability to tweak them in some form or fashion.

Things have moved so far that the term robo-advisor may already be out-of-date. Josh Brown at the Reformed Broker writes:

The entire wealth management industry is going to converge with the robo-advisory space in terms of both the degree of automation and the price. The whole thing will look a lot like what Bill Harris built five years ago at Personal Capital – lower cost investment advisory with a web-first interface and flesh-and-blood advisors behind it. This is what Fidelity and Vanguard are building, it’s what Schwab is building and it’s what Betterment, the most successful standalone, has become.

This convergence on a new model is also driving down costs for investors. Jason Zweig, Anne Tergesen and Andrea Fuller in the WSJ also take note of the growing influence of the robo-advisor model:

In the latest test of the reach of technology, a new breed of competitors— including Betterment LLC and Wealthfront Inc. but also initiatives from established firms such as Vanguard—is contending even the most personal financial advice can be delivered online, over the phone or by videoconferencing, with fees as low as zero. The goal is to provide good-enough quality at a much lower price.

Algorithms are not perfect. Then again we humans aren’t either. The robo-advisor business model has taken hold in large part because it can provide exactly this: “good-enough quality at a much lower price.” That is exactly what Marc Andreessen meant when he wrote that “software is eating the world.” The application of software in areas not previously implemented.

As predicted software moved up the value chain in the investment world, lowered costs and standardized outcomes. However the genius of the robo-advisor model isn’t the efficiency of its software. It is getting a wide swath of American investors to overcome their aversion to algorithms and let some one else do the driving.