Money manager AllianceBernstein ($AB) is moving much of its operations from New York City to Nashville, Tennessee. Sarah Krouse at the WSJ writes:

One of the oldest names on Wall Street is moving to one of the fastest-growing cities in the South, reinforcing a recent shift in finance jobs to cheaper parts of the U.S…The growth of low-cost index-tracking funds and greater fee sensitivity among investors has put unprecedented pressure on money managers, prompting many firms to slash fees and cut expenses to remain competitive.

This is just another symbol of the tumultuous times facing big, incumbent money managers. Last week Justin Baer at the WSJ that Pimco was opening an Austin, Texas office to:

Recruit more tech-savvy workers who might otherwise spurn the bond manager for traditional software companies, people familiar with the matter said…Many of those new employees will be engineers tasked with modernizing Pimco’s technology systems, from the tools used to harness new databases of information to the platforms that trade bonds electronically. The changes aim to sharpen investment ideas and lower costs.

While money managers are hiring quants and data scientists they are looking to cut expensive fundamental managers. Stephen Foley at the FT writes:

BlackRock has fired several prominent stockpicking fund managers and plans to switch their funds to quantitative investment strategies, in what chief executive Larry Fink called a “pivot” away from areas of active management that have fallen out of favour.

While this is going on Blackrock ($BLK) is beefing up its quantitative tools and products. An example of this is the launch of the iShares Evolved sector ETFs. Carolina Wilson at Bloomberg notes these new ETFs are based upon “machine learning and natural language processing” and are cheaper than Blackrock’s traditional sector ETF offerings.

Taken as a whole the move towards indexing, ETFs and quantitative strategies is putting pressure on revenues for many firms. Falling fees and rising costs are putting pressure on margins, especially for the smallest (less than $100 billion in AUM) managers. Many institutional investors report planning to drop traditional active managers for passive offerings. All of this is leading to a surge in asset manager dealmaking. Rising markets have helped managers build AUM but the pressures still remain. 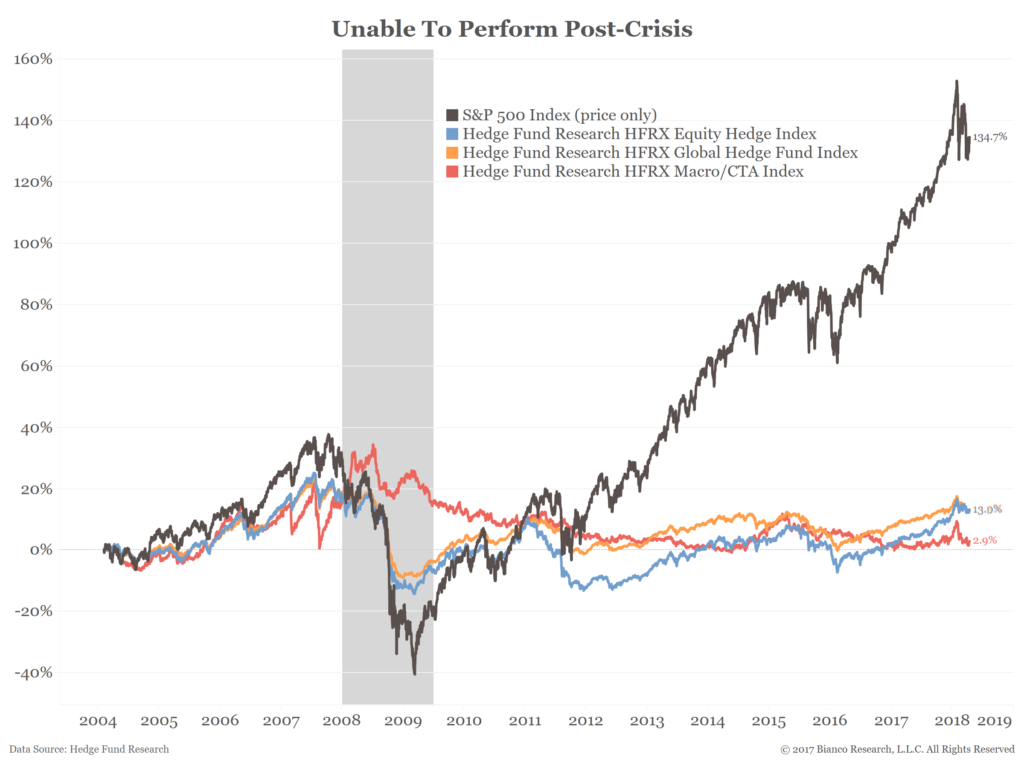 Unfortunately for traditional asset managers there is no going back. Jim Bianco writing at Bloomberg notes how the asset management industry is often not on the list of options for tech-savvy graduates these days. He writes:

Active management is being disrupted, and passive options are the disruptors. As was the case with taxi drivers fighting Uber, these disruptors are not going away. Higher volatility may help some active managers, but investors will need to see long periods of outperformance before reconsidering their affinity for passive investments.

While the hype around artificial intelligence is in the short term is overblown, over the long run it will have a massive effect on the asset management business. For now analysts and portfolio managers can tell themselves they can work with AI to enhance their current capabilities. Over the long run, AI will move from the back office to the front office and take big chunks of incumbents out along the way. The hedge fund industry has managed to hold onto its asset base, but many within it recognize the day of the star manager are likely behind them.

At some point there will be a backlash. A bear market will make even low costs index funds look like a bad bet. Robo-advisors will see clients leave as even their well-diversified portfolios decline in value. Some quantitatively managed hedge funds will blow up along the way. It always happens as capital and talent rush through a narrow door towards an opportunity. But there is no going back for the investment management industry.

Once software, broadly defined to include AI and big data, begins to take share things will only go in one direction. Will there still be room for fundamental analysts using advanced data analysis to pick stocks? Sure, but they won’t be able to charge what they did during the good old days. In this technology-dominated age, robots typically don’t get replaced by humans, they get replaced by better robots.* So if you want a job managing money, you have to be prepared for a brave, new world.

*Apparently Tesla being the exception to this rule.