Mick Weinstein, “Strong money managers are constantly working on their process, questioning it, listening to others for insight, and tweaking it as they go.”  (Covestor) 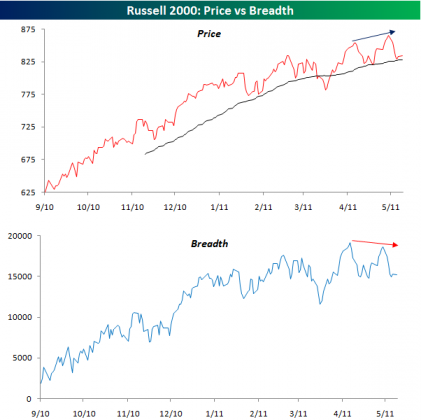 Small caps are at a critical juncture.  (Bespoke)

Last week aside, the oil boom is not necessarily over.  (UpsideTrader)

Here is one commodity that is in a bear market:  onions.  (Real Time Economics)

Don’t sell in May.  Switch in May.  (EconomPic Data)

Is there any seasonality in gold and gold miners?  (CXO Advisory Group)

Fundamentals only get you so far.  (Market Anthropology)

On the importance of stepping away from the trading screen.  (SMB Training)

Can Groupon pivot its business model prior to a much anticipated IPO?  (CNNMoney)

Who needs a living room when there is an iPad?  (Howard Lindzon)

Apple (AAPL) is the most valuable brand in the world.  (Bloomberg, Apple 2.0, Forbes)

Among other things Apple is a particularly efficient company.  (Asymco)

When should you fire your fund manager?  (WashingtonPost)

Barry Ritholtz, “The surviving Dodo Bird Bankers are an unnatural blasphemy on Capitalism. Their continued existence undermines faith on our laws, institutions, and economy.”  (Big Picture)

Don’t worry about the CEOs, they did just fine last year.  (WSJ)

Is emerging market inflation that out of whack?  (beyondbrics)

Can a country have too much in the way of currency reserves?  (voxEU)

The Fed has very little effect on housing at the moment.  (Fortune)

Has the stock market fully incorporated a slowdown in economic growth?  (Capital Spectator)

More on the resurgence in the US manufacturing economy.  (Bloomberg)

Uncle Sam is putting some assets up for sale.  (Planet Money, Marginal Revolution)

Econ bloggers are nothing if not uncertain about the US economy.  (Kauffman, FT Alphaville)

What you missed in our Monday morning linkfest. (Abnormal Returns)

Megacaps are cheaper than they have ever been. Is summer their time to shine?  (AR Screencast)