Rob Carrick, “The mutual fund industry dines off your ignorance.”  (The Globe and Mail) 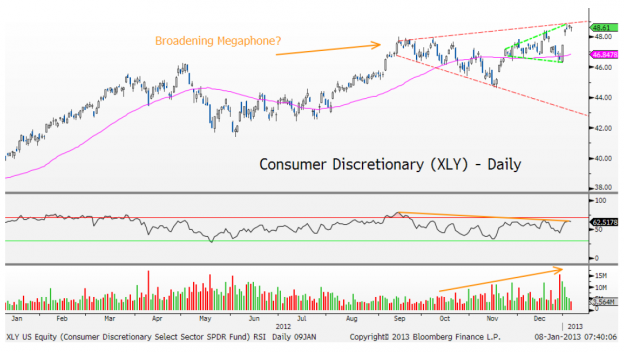 Is the consumer discretionary sector losing steam?  (All Star Charts)

2013 should be another year of record dividends.  (MarketBeat)

Managed account platforms are the future of hedge funds.  (All About Alpha)

The risks of diversifying beyond a 60/40 portfolio are often more than the original risk taken.  (InvestmentNews)

The many lies we tell ourselves as investors.  (Big Picture)

The traits of a really bad trader.  (Brian Lund)

We are obsessed with being right and nine more lessons from Mark Douglas.  (Ivanhoff Capital)

A Q&A with the John Del Vecchio and Tom Jacobs authors of What’s Behind the Numbers? A Guide to Exposing Financial Chicanery and Avoiding Huge Losses in Your Portfolio.  (SumZero)

Apple’s ($AAPL) iPad business would be the 11th largest tech company on a standalone basis.  (Apple 2.0)

Technology is not just for technology companies.  (GigaOM)

The big banks settled a series of mortgage-related suits.  (WSJ)

Is Bank of America ($BAC) ready to get back into the mortgage business?  (Quartz)

Talk about biting the hand that bails you out:  AIG ($AIG) is thinking about suing the US government.  (Dealbook, Wonkblog, Cassandra Does Tokyo)

Should university endowment funds invest in funds managed by its own trustees?  (Dealbook)

ETF statistics for December 2012.  (Invest With an Edge)

On the rise of the emerging market consumer class.  (Economist)

Don’t get attached to the Euro rally.  (Market Anthropology)

How big a negative is the return of the full payroll tax?  (FT Alphaville, Wonkblog)

Why housing prices should continue to rise in 2013.  (Calculated Risk)

Everybody calm down. Nobody is minting a trillion dollar platinum coin.  (Felix Salmon, WSJ)

On the effectiveness of short bursts of exercise.  (WSJ)